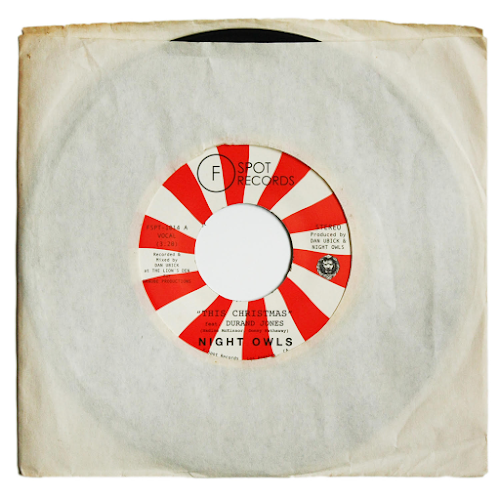 Just in time for Christmas, The Night Owls have returned with a new 45 showcasing a festive cover of "This Christmas" with Durand Jones. The Night Owls (or just Night Owls) are drummer Blake Colie, guitarist Dan Ubick, and bassist Dave Wilder of The Lions, along with The Aggrolites' long-time piano/organ player Roger Rivas. Durand Jones is, of course, the frontman and namesake of critically-acclaimed Soul/Funk revival ensemble, Durand Jones & The Indications. Following "There's A Break In The Road" B/W "Inner City Blues (Make Me Wanna Holler)" released this past July, Night Owls have re-emerged to bring us a Reggae-tinged version of "This Christmas" first popularized by Donny Hathaway in 1970 for ATCO Records. "A perfect jam to have on deck this holiday season. Side B features an instrumental version, where the Funky and grooving organ stylings of Roger Rivas keep the tune alive to be played on the dance floor [year-round]. Sure to sell out, this 45 is not one to sleep on!" says F-Spot Records owner and founder David Celia.


There were only 500 super-limited edition copies of The Night Owls' "This Christmas" pressed, now split across F-Spot Records, Colemine Records, and various online/brick-and-mortar record stores; supposedly, Colemine Records' stock is already completely SOLD OUT, but a limited number of copies remain available directly from F-Spot Records, as well as said digital/physical retailers. "Happy to have a new take on this incredible tune, 'cause I love, love, love the original so much and hope more people find out about that because of me and Night Owls doing this with Durand," Dan Ubick explains. Night Owls' "This Christmas" Feat. Durand Jones' 7-inch is currently available for pre-order from F-Spot Records with orders expected to start shipping on December 9th with a wide release date of Friday, December 13, 2019. It appears as though Fishbone's Christopher Dowd (@thedowdjones) was recently down in The Lion's Den, as well, to track vocals on what's only been described as "a new Night Owls cover," which Night Owls (@nightowlsreggaesoul) adds "came out great!"


EDITOR'S NOTE: Although, by the time you're reading this, please, take note that F-Spot Records' web-store might be completely sold out... However, you're strongly urged to call or email your local record store to see, if they happen to have any copies of The Night Owls Feat. Durand Jones' "This Christmas" coming in on order before the holidays.