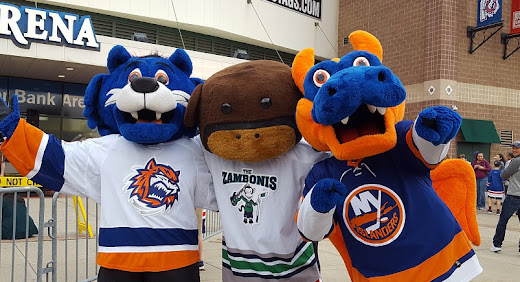 For this week's SECOND installment of Guts of The Ice, we spoke with THE ZAMBONIS' long-standing mascot, The Hockey Monkey. As legend has it, as THE ZAMBONIS themselves put it, "in 1997, we ZAMBONIS and our pal, James Kochalka, wrote a song called "Hockey Monkey." We, then, made some [money] from the song (Nickelodeon & FOX TV.) Instead of investing that money in management, publicist, etc. etc. we bought a $2,000 monkey suit. The Hockey Monkey is our friend and member of THE ZAMBONIS. This is not your average monkey." The Hockey Monkey has served as the "hardcore rocking, banana-spitting, guitar-smashing primate" mascot, hype man, and general sharer of merriment for THE ZAMBONIS for 20+ years now. Prior to his tenure with THE ZAMBONIS, H. Monkey did stints as The Rhode Island Rams' mascot, Rhody The Ram, The New York Islanders' Sparky The Dragon, and The Bridgeport Sound Tigers' Storm. "He is our prime mate! Jane Goodall has said it is astounding how Hockey Monkey can sing most of the words to Poison's "Every Rose Has It's Thorn." 20 years in THE ZAMBONIS and all we pay him is bananas. That's devotion," ZAMBONIS frontman and co-founder Dave "Zamboni" Schneider gushes. Below, you will find our comprehensive interview with H. Monkey himself, wherein, we talk about everything from bananas to Puck Rock/Hockey-core, along with an exclusive playlist entitled The Hockey Monkey's Top 5 Hockey Arena Songs for The Witzard, as well.


01. What are your Top 5 party-starting hockey arena songs and why for each?

Hockey Monkey: "Welcome to The Jungle - Guns N' Roses: What better way to start a game!

"Tom Sawyer" - Rush: Rush must be payed at hockey games! Little-known fact: its a law in Canada that Rush is the only band that can be played during hockey games. I was going to pick "2112," but the commercial breaks are not that long. R.I.P. Neil.

"Machinehead" - Bush: Sorry, Matt, I am a 90's monkey. Perfect for a power-play/killer riff!

"(I Wanna Drive The) Zamboni" - THE ZAMBONIS: Can I plug my own band? Why the Hell not. An intermission staple!

"Kickstart My Heart" - Mötley Crüe: I didn't want to add this one, as I still hold a personal grudge with the guys (they don't know that!) I went to LA for the "last Mötley Crüe" show ever... LIARS! But this song is to good. I sent an email to Nikki Sixx about being reimbursed, [but] he has not responded.

Bonus Round: Top 5 Puck Rock songs - should be played at ALL hockey games.

"Change The World with My Hockey Stick" - The Vandals

"Thorn In My Side" - Quicksand: There is always an agitator on every team; this is one is for them!

Anything from my old friends in Two Man Advantage!

02. What's a typical must-have item to take with you every time you go out on tour?

H. Monkey: This a softball of a question. Obviously, it is my silk pajamas. I bet you though I would say "bananas" (those are, also, important!)

H. Monkey: Here we go! Just some background information. I met Dave Zamboni while working for The Bridgeport Sound Tigers. He was the MC and I was the mascot. We had an idea to come up with a mascot for the band based on the song "Hockey Monkey." Here we are almost 20 years later. The Hockey Monkey sings (off-key,) dances, air guitars, and provides generally merriment to all attendees.

PS: I was, also, the mascot for The NY Islanders for seven seasons!

04. What's your most well-received on-stage mascot/hype man trick or antic?

H. Monkey: We like to do a little [Motörhead] "Ace of Spades" with The Monkey on vocals; that's always a fun one. The old Bananas Toss is a hit, as well. I am trying to convince Captain Dave to do a cover of Gwen Stefani's "Hollaback Girl." "This sh*t is bananas..." still waiting. 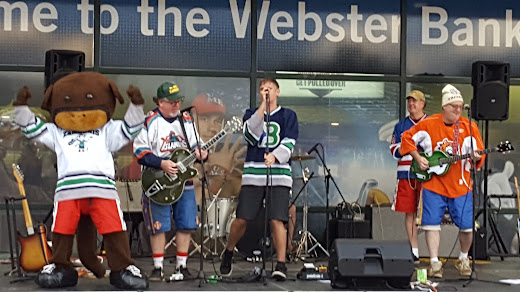 THE ZAMBONIS at The Webster Bank Arena (SOURCE: Matt Gonzalez)

05. In your opinion, what is the most important or memorable line from THE ZAMBONIS song, "Hockey Monkey," your namesake, and why?

H. Monkey: "7-8-9, havin' a good time, yeah!!" The Monkey always brings the party and the good times! Pre-show, during the show, post-show! The Jägermeister helps. Don't tell the kids or Captain Dave!!

06. What's the current status of your solo/side-project, MonkeyBassman? I recently read about it within your 2014 interview with Lighthouse Hockey.

H. Monkey: MonkeyBassman is still not off-the-ground. As you know, it's a tough time for musicians out there. There just doesn't seem to be a market for [an] Avant-garde band that combines bass riffs with a dancing monkey in a hockey jersey. We are still looking for a label, if you know anyone. Where is Andy Warhol when you need him?


07. Can you tell us a bit about what made you decide to start covering Poison's "Every Rose Has It's Thorn" at ZAMBONIS shows? Also, are you still actively wearing your vintage USSR hockey jersey?

H. Monkey: Every once it a while, when the mood is right and the stars are aligned, I just get that feeling. The feeling that it's time for a power-ballad! I put the USSR jersey back in storage; apparently, Communism isn't that popular anymore.

08. What would you say is one of your "craziest" stories (you can share!) from your time spent out on the road touring with THE ZAMBONIS?

H. Monkey: Oh, Oswego, NY! Maybe, 10 years ago, we played a gig at Oswego Harbor Fest. Great show, great fireworks, but the night was still young. Later that evening, we made our way to The Gaslight Pub. We, THE ZAMBONIS, had some fans there! They were buying us shots and playing ZAMBONIS tracks on the jukebox. Fast-forward to closing time: me & BassMan decided the night wasn't over yet, so we headed to an after-party at a local fan's house. Surprise, it was a pool party! A naked pool party and while everyone was frolicking in the pool, someone was sat on the edge playing "Hockey Monkey" on an acoustic guitar. " 7-8-9, havin' a good time, yeah." That was weird! We love you, Oswego!!


"So, there was a time we, @THEZAMBONIS, played a gig with @TwoManAdvantage during a snow storm in Saratoga Springs, NY. It was epic. However, if two Puck Rock bands play in a bar and no one came to hear it, do they still make a sound? Yes, they do, a very loud sound!" 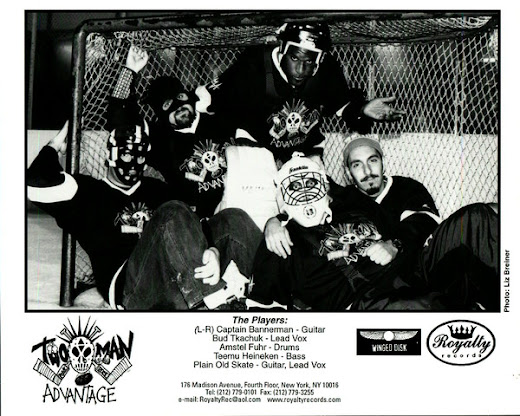