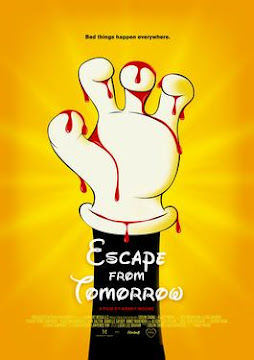 While it was filmed on-location at Disney World/Land, Escape from Tomorrow is about as far from family-friendly as it gets; First time director Randy Moore bravely filmed his Neo-Noir Fantasy flick guerrilla-style over a month-long period at 2 separate Disney theme parks, entering undercover as "tourists" along with his cast and crew. Moore strongly suggested that "scripts and all shooting directions [be] kept on iPhones so that "when actors and crew were looking down between takes, passersby thought they were [just] glancing at their messages."" Surprisingly, with little to relatively no suspicion, Roy Abramsohn and his on-screen family entered the park(s) day after day in the same repeat outfits, which Randy Moore's crew filmed on average Cannon handi-cams.


It seems like Escape from Tomorrow centers around a father and son's last day on their semi-disjointed family vacation, whose "sanity is challenged by a chance encounter with two under-age girls on holiday." For the most part, The Walt Disney Company is very selective with who exactly they lend the rights to their trademark characters, movies, likeness, etc. But at press time, Disney has yet to publicly respond to Moore's jarring take on vintage Americana, to seemingly avoid negative press and help further exercise "fair usage" rights. Following it's fairly well-received Sundance premier last January, Escape from Tomorrow is finally headed to select theatres and home-video ONdemand services this upcoming October 11th. It should be pretty interesting to see how many audiences Randy Moore's film eventually manages to reach and what they'll think of his unique interpretation of Disney theme parks and whatnot!
Posted by Matt Horowitz at 11:13 PM