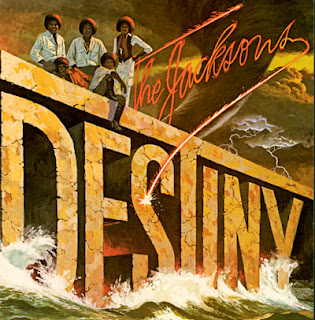 Full disclosure here: "Shake Your Body (Down to The Ground)" is quite easily amongst my favourite Michael Jackson/The Jackson 5 tracks; thanks to my wonderful parents (married 29 years today!) who exposed me to Jackson, Billy Joel, Elton John, Stevie Wonder, etc. records at a very young, impressionable age. While Justin Timberlake is currently ramping up to unleash the second part of his first album in nearly 6 years, The 20/20 Experience, he stopped by BBC1 Live Lounge over the weekend, just days after debuting new material at iHeart Radio Music Fest (Vegas). Along with familiar hits new and old, Timberlake and The Tennessee Kids ripped through a pretty spot-on, Funk-laden version of "Shake Your Body." Random coincidence or not, Justin Timberlake was very recently awarded the coveted Michael Jackson Video Vanguard Award at this year's MTV VMA's, where Timberlake briefly reunited with his wildly popular and now-defunct "boy band," N'SYNC.


The Randy & Michael-penned Destiny era smash-hit (1978) was supposedly inspired by both Teddy Pendergrass' [then] just-released "Get Up, Get Down, Get Funky, Get Loose" and some run-of-the-mill Marvin Gaye ad-libs. While The 20/20 Experience (Part 2) is slated for a Sept. 27-Oct. 1st world-wide release, it's currently streaming over at iTunes, a little more than a week early. It's been described by Timberlake himself as The 20/20 Experience's "hotter, older evil twin sister." He continued in a recent New York Times featurette: "If you could imagine you're 16 and she's everything you thought. She's Marilyn Monroe and then you meet her older sister; everything that's dark and wrong about her at that age is why you become infatuated with her." Sounds... interesting!
Posted by Matt Horowitz at 7:19 PM