"[I'm] not sure there's ever been a Hip-Hop producer less Hip-Hop than me," Dan Hayden On Homeboy Sandman & Aesop Rock's Lice 2: Still Buggin' EP (Behind The Beat, Part 1) 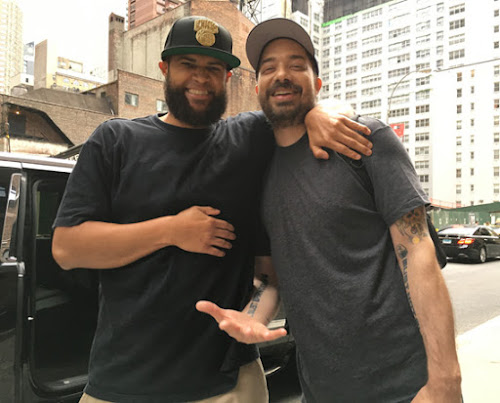 "Aesop Rock & Homeboy Sandman are back together once more, to deliver a new strain of Lice to fans worldwide. People of Earth, we are proud to announce our new FREE EP—Lice 2: Still Buggin'—available for download NOW, via Rhymesayers Entertainment and Stones Throw Records... Now, go share Lice [2] with everyone you know," Homeboy Sandman & Aesop Rock wrote within a rather spur-of-the-moment joint statement to accompany their 2015 Lice EP follow-up, Lice 2: Still Buggin' yesterday morning; their latest "infestation" of Lice showcases production from the likes of Dan Hayden, Mondee, SoberMindedMusiC, Your Old Droog producer (El) RTNC, and Aesop Rock himself. Bristol-based producer Dan Hayden, who hand-crafted the beat for "Zilch," was recently profiled within Homeboy Sandman's inaugural self-penned Bandcamp Daily column titled, Big Ups: Homeboy Sandman Picks His Favorite Hip-Hop Artists. "Kid has mad range. Kid also has straight heaters. I would compare his production to... nobody comes to mind! I love that. I imagine that one would have to have an eclectic palette—much like myself—to truly appreciate what Dan Hayden is doing," Sandman ecstatically wrote; and now, seemingly even unbeknownst to Hayden, until yesterday morning's sudden unveiling, the sharp-tongued rapper and greenhorn producer have linked up for Lice 2: Still Buggin' EP's lead-off track.


"No problem. Actually, this was kind of a surprise—Homeboy Sandman is one of my real favourites and a couple of years or so ago, I sent him a link to a beat tape I'd made. Heard nothing back, but I persisted a bit and eventually, he messaged me back saying "OK cool, just send me your best two beats by email and I'll take a listen." So, I picked a couple and he was like, "oh yeah, both of these are butters." I'm British, so I didn't even know what that meant, but I took it as a positive...! So since then, I've just emailed him stuff as I've made it and this one on the [Lice 2: Still Buggin'] EP is one he'd picked up on ages ago and I guess has just had kicking around..." Dan Hayden wrote within a statement sent EXCLUSIVELY to The Witzard upon Still Buggin''s Thursday morning release. "So, I got an email from him a couple of months ago or something saying he was planning on recording to it with Aesop [Rock] and [if it] was it still available and so, I've been really excited about hearing it since then. [I'm] not sure there's ever been a Hip-Hop producer less Hip-Hop than me," Hayden continued. When asked if he and Homeboy Sandman (and even Aesop Rock, for good measure) were planning to record and release a full-length together, Dan Hayden responded, "no plans at the moment for anything further, although I hope to do more with him, obviously!"
Posted by Matt Horowitz at 6:31 AM