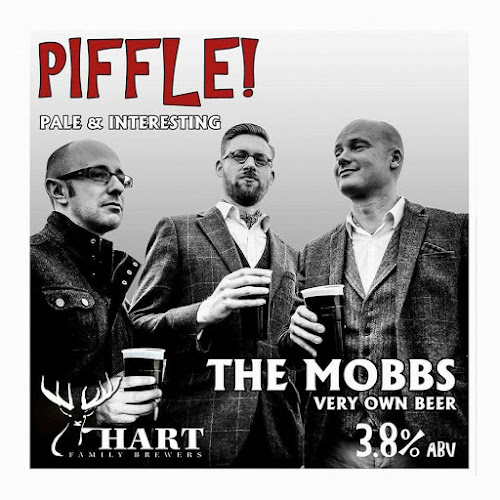 "The Mobbs are a trio of English gentlemen whose urbane and well-bred appearance lies in stark contrast to the ferocious intensity of the rocket-fueled sonic blasts of their guitar-based rave ups... Being aware that these gentlemen are planning to [kick] your ar*e and leave you for dead in a Northampton gutter is one thing; their brilliance is that they do it in such a way you can't help but pour them a gin and run them a bath first," reads a fragmented chunk of a wonderfully well-written mynewsdesk press release I recently received from London-based Dirty Water Records. Drawing assorted influence from both sides of "the pond" across nearly four decades-worth of Punk Rock, The Mobbs, at times, evoke The Clash, Black Flag, mid-90's Ska revivalists Rancid, and Celtic-Punk forefathers themselves, Flogging Molly; Joe B. Humbled, The Bishop & Cheadle have somehow still managed to craft a unique sub-genre best described as "Punk Rock for Gentlemen" "Garage Punk for Boys" or "refined (yet edgy) 20-something Punk Rock gentlemen approaching 30," much like myself. Dirty Water Records announced they will co-release The Mobbs' long-awaited fourth album, PIFFLE! with Cravat Records (their second with bassist The Bishop) this upcoming Friday, September 24th—they've additionally planned a record release show at The Pomfret Arms Northampton 24/09/2016 at 9:00pm, wherein Hart Family Brewers Wellingborough will unveil The Mobbs' very own PIFFLE! "Pale & Interesting" beer. I was lucky enough to get in touch with drummer and resident in-house PR rep Cheadle, who in turn, got me in direct contact with The Mobbs' frontman Joe B. Hombled, who was gracious enough to partake within the... "Pale & Interesting" interview you see down below; without further ado, feel free too kick back, hang up your studded leather jacket and Doc Martins, crack open a cold PIFFLE! Pale & Interesting beer, and delve deep into this particularly Garage Punk for Boys (and Girls)-centric interview!

I. What might you likely cite as the earliest sources of influence behind your "Punk Rock as Gentlemen" ideology?


II. How do you feel your overall sound has progressed since your first album, IT'S... THE MOBBS (2011)?

Well, the sound hasn't really progressed, but I suppose you could say it is different. In creating the style of Rock "N" Roll that we play, there's not much need for progression sonically... the sound is what it is... guitar, bass, drums, and vocals. We are perhaps a little more refined, musically. The recordings sound different because we've recorded at different studios. The song-writing has probably progressed, as [opposed] the sound. We've changed bass players since 2011, so that naturally has changed our sound a little.


III. Your mynewsdesk press release states that "these Northampton lads are named for one of their local heroes: Edgar Mobbs, captain of Northampton Saints RFC from 1907-13..." What would you care to share about Capt. Mobbs' legacy and why did you chaps ultimately decide to name your band after him?

It worked because it sounded like "the mods" or "mob," I think. Edgar Mobbs was a typical British, tally-ho!-type character, in my eyes and I thought it'd be amusing to tie everything together like that... if that makes any sense?!? We had largely forgotten about our roots with E. Mobbs, but interestingly [enough,] the people in the Dirty Water Records press release dept. have revived the idea.


VI. "One review described [The Mobbs] as being 'like The Rockin' Vickers meets The Leyton Buzzards,'" but what would you likely cite as some of your greatest sources of influence on PIFFLE!?

I was listening to a lot of The Masonics, at the time of writing the songs, so most certainly, a massive influence there. I re-discovered the first Kinks LP, KINKS (1964) and was listening to that a great deal. With a track like "Matador," that's very much an attempt to write something in the style of The Ventures or The Shadows.


V. How would you attempt to best describe your limited-run Hart Family Brewers PIFFLE! "Pale & Interesting" beer for those of us who, unfortunately, won't be able to attend your 24/09/2016 hometown record release show?

Well, until we taste it, we won’t be able to tell you exactly... hopefully, the “pale and interesting” bit helps? We are suitably informed by our friend Rob Hart, who runs the brewery, that it will be very "hoppy." There will be an interesting mix of English hops and Japanese hops adding to the flavour. It’s going to be a light, low-percentage ale.


VI. How did you initially come to meet and form The Mobbs with Cheadle and Jimi The Dutch—who unfortunately, passed away in 2013? How did you come to find new bassist The Bishop and decide to bring him into the fold?

Jimi The Dutch & Cheadle were in another band together until I (Joe B. Humbled), stole them both to form The Mobbs in 2008. Jimi is alive and well, by the way... he just moved to Berlin for love (or something). We were very lucky to rope in Brendan "The Bishop" to continue the grand work Jimi left behind.


VII. We pride ourselves on being a primarily Hip-Hop-centric publication here at The Witzard with one foot firmly planted in Indie Rock and Punk Rock; with that said, what would you likely cite as a few of your Favorite Hip-Hop releases (be it albums, mixtapes, singles, etc.) of the past 6-8 months?

We have very little knowledge of Hip-Hop, so the past 6 to 8 months would mean we have 0 favourites at all, I'm afraid.


VIII. Now, with PIFFLE!/"Pale & Interesting"'s soon-impending September 24th release, what do you gentlemen have planned leading up to or even after its release? Did I hear rumblings about a proper "Mojo Degradation" video?

The "Mojo Degradation" video is ready and will hopefully be viewable by September 10th. We are struggling to get gigs at present, but hopefully, following the release, we'll sort out some kind of mini-[European] tour or maybe a UK one.


IX. What initially compelled you to blatantly use the formerly non-Punk Rock word "nonchalant" throughout "Jolly Good" (2011)? It's extremely awesome, I must however, admit and fully embodies your slightly left-of-center "Punk Rock for Gentlemen" ethos!!!

Well, it's just a funny word to use I suppose. It's all just humour. Punk Rock at it's best, is just slap-stick comedy, really... I don't think we've ever really been a "Punk Rock" group in the truest sense, though. We take off our hats to Punk Rock, but we're more grounded in 1950-60's Rock "N" Roll.


X. Excuse me for even having to ask this—maybe it's just an American thing... but what exactly does your latest album title, PIFFLE! stand for or mean in layman's terms?

Google it! I suppose we've used it as a kind of self-explorative "put down" phrase in the song itself; "...this is useless, this is drivel! Endless, endless, endless piffle..."


XI. Let's just say, for argument's sake... you were able to assemble a super-group of any musicians of your choosing (alive or dead), who would you likely pick and why?

A hard question... Wilko Johnson on guitar, Howlin' Wolf on vocals, [The Who's] Keith Moon on drums, and Paul McCartney on bass—that’s my personal answer, but I’m sure The Bishop, for one, would have a few issues with a line-up like that!


XII. Now, for the million dollar question: do you fellas have have any immediate plans to head "across the pond" for a state-side Mobbs-mania tour... preferably Philly... or better yet, South Jersey!!!

That’d be super. We unfortunately, don’t get out too much and when we do, we’re only able to do two-night shows in mainland Europe. This is mainly due to the guys having young families, at this time... but we’d not ignore the possibility!

Posted by Matt Horowitz at 7:47 PM