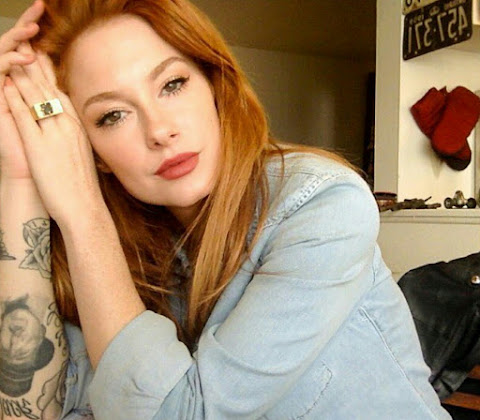 "What would happen if 007 was portrayed by a strong female lead, photographed by Helmut Newton, and adorned with a soundtrack of dark romantic Soul? Meet Red Rosamond," LA-based songstress Red Rosamond's Soundcloud reads. Although, she's only released two songs thus far, Rosamond has already drawn rather striking comparisons to Amy Winehouse, Lana del Rey, and Nancy Sinatra. "I am driven by love. I am inspired by the emotionally authentic—the passionate, the bold, the determined—and the flawed. I grew up listening to stars like Aretha Franklin, Dinah Washington, Al Green & Tina Turner. Inspired by their work, every song I write I aim to be true. "Damn" is about the power play between two people. The magnetism, the seduction... It’s about desire and heartbreak, about someone who has a hold on you. We all have that one that got away and this is our soundtrack, my love letter to you," signed 𝔁 𝓡𝓮𝓭, written within her emailed "Damn" press package. "Damn" was premiered at CLASH Music, who quickly dubbed it their coveted Track of The Day 27/9, nearly one month behind her previous single, "Looks Can Kill."


"What do we know about Red Rosamond? Not a great deal, honestly. She's a copper-haired fox with a range as huskily emotive as Adele's powerful pipes. "Looks Can Kill" is a sexy sliver of a song: svelte strings and swaggering guitars and lyrics that run like illicit film stills still to be swept up from the cutting room floor, Noisey scribe Kim Taylor Bennett, who premiered "Looks Can Kill" last month, wrote deep within her "Introducing Red Rosamond..." piece. Rosamond's initial roll-out and coming out to the world is very reminiscent of Lana del Rey's 2012 double A-side "Video Games" and "Blue Jeans" roll-out, wherein no one really knew much of anything about this pouty-lipped, ginger enchantress—we just instantly knew that she had some Christina Aguilera-esque pipes and an undeniable, mysterious presence. It's pretty wild to think that someone like Lana del Rey, who was influenced by everyone from Britney Spears to Bob Dylan, has already risen the ranks of the music industry ladder enough to in turn, influence yet another sultry-voiced new artist like Red Rosamond, in a matter of six years after her own debut. It's currently unclear where Red Rosamond's "Damn" and "Looks Can Kill" will ultimately end up, but one thing's for sure: it's surely gonna be one wild ride!