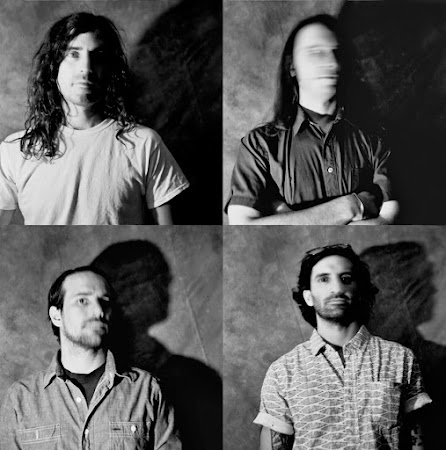 "Today, we announce our forthcoming full-length record, Devil Music, on our very own We Are The Men Records. The LP will be available on Friday, November 11, 2016. We found a [farm] and scratched down the songs on this LP after just a couple of days in our practice space. Luckily, our space and our studio are the same exact f**king room!, so the proceedings went quickly. “Gun” was [cut on] Friday after our shifts and some messing around with a Harry Nilsson tune. The rest were recorded on Saturday and Sunday, the holy days. You haven’t heard much from us lately, have you? It’s good to be alive and playing music," read a typewritten statement, addressed to "Everyone," published to The Men's Blogspot-run band site Monday, September 12th. It's an odd coincidence, since I was just listening to their infectious Creedance, Bob Dylan, and Rolling Stones-influenced 2014 album, Tomorrow's Hits on my Nexus 7 last week at work and wondering when the next, normally annually-released, The Men album would likely surface. Nick, Mark, Kevin & Rich additionally wrote that while Devil Music will be released on their own newly-formed We Are The Men Music, "Sacred Bones Records will carry copies and your record store should have it" and that LP copies will become available for pre-order within the 'Store' section of their site.


"Devil Music? Maybe it’s you and me. Here [are nine] new songs... it feels like music is all that remains for most of us... the little people... Thanks to our friend Jordan Lovelace for recording this album and to Jonny Schenke and his head shaking positively in front of the Neve. You can order the vinyl record right here on our sire or get mp3’s from the digital platforms out there and hopefully, in your local record store; in New York, our home, things are changing. Maybe you’re listening on Harlem River Drive..." continued The Men's self-penned press sheet. Devil Music will include tracks titled "Dreamer," "Crime," "Ridin' On," "Lion's Den," "Patterns," "Violate," "Hit The Ground," "Devil Music," "Gun," and "Fire," one of which appears to be a riled up Harry Nilsson cover.

"["Lion's Den"] started out as a slow acoustic guitar part that I tried to feel out like Boubacar Traore​. I brought it to Mark [Perro] and we psyched it way out to the point of a dry spoken vocal, while he painted some great sound under noise behind the riff that went towards Pink Floyd. Then, it morphed into something no one was really feeling for a while... pretty soon though, I started the saxophone and we just played it with a faster tempo with this sort of free sax part over it. It keeps getting shape and it keeps getting wild and rowdy and really fun to play," The Men's guitar and sax player Nick Chiericozzi recently revealed to VICE's sister music site, Noisey. 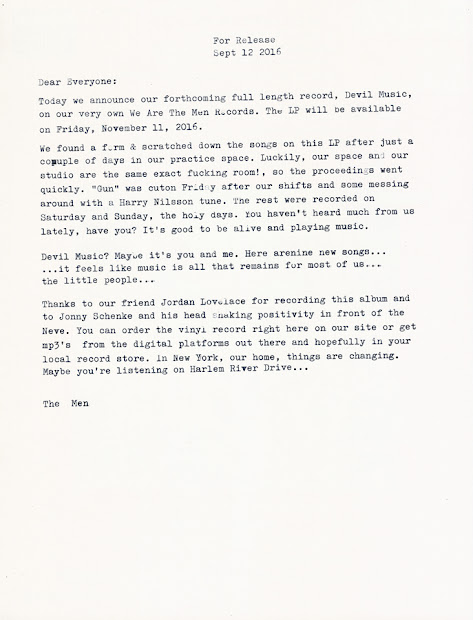 Posted by Matt Horowitz at 2:06 AM