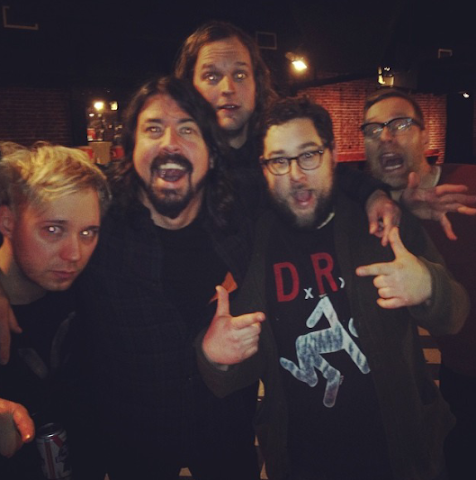 "Power-dirge from Pennsylvania; Pissed Jeans are noisy as a motherf*cker and proud of it on this, their debut full-length, which sounds like a big pile of mud and broken glass ripping through your stereo speaker in the most killer way imaginable," reads a juicy chunk of Sub Pop's overtly descriptive Shallow re-issue mini-press release. Frontman and part-time music critic Matt Korvette along with his fellow Pissed Jean-ers enlisted frequent collaborator Joe Stakun, who previously directed Honeys stand-outs "Bathroom Laughter" and "Romanticize Me," to shoot a clip for "Boring Girls" from their newly-remastered nine-year-old Shallow album (2005). Not entirely unlike Stakun's former creations, "Boring Girls" is an oddly disjointed visual presentation, which perfect matches Pissed Jeans' whole self-imploding Noise-Rock aesthetic; it starts out resembling your run-of-the-mill clip, with our long john-outfitted protagonist, Clay Tatum, seemingly getting ready for bed... until a sudden squealing guitar-backed gust of wind ushers in a flurry of multi-colored birthday balloons and an eerily ecstatic bed-side tap dancer.


For reasons largely unknown, Tatum receives an urgent night-time mail delivery, as the mail lady exclaims, "Are you ready for your big date... You have a big date tonight." Clay Tatum frantically jumps into a suit, as his bedroom suddenly morphs into a quaint Italian restaurant and his date, (Jennifer Lawrence's BFF) Laura Simpson arrives at his door. "There's only one type of girl on my mind. She's always on my mind," Tatum passionately bellows across the table, but before long, his date abruptly goes sour, as Simpson storms out after noticing her picture on his nightstand. While I'm not entirely sure what happens next, "Boring Girls" seems to transform into some sort of twisted, strobe light-laden nightmare/reality, wherein Clay Tatum plunges from the sky back into his bed. And it just gets more and more demented from there on out for the final minute-long duration of Joe Stakun's latest video treatment, until Tatum awakes, choking on his retainer backed with a stock laugh track. Pissed Jeans' newly-remastered and re-issued 10-track Shallow is now available in a variety of audio formats and assorted bundle packs on Sub Pop's online mega-mart, preceding their week-long West Coast mini-tour this upcoming November.