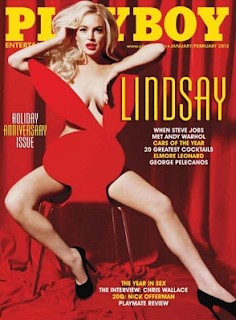 Lindsay Lohan essentially embodies exactly "What NOT to Do In Hollywood:" Fame, fortune, success... sex, drugs & Rock "N" Roll. Within a fairly short period of time, Lohan somehow managed to obtain a plentiful helping of POWER @ a very young age. This gradual rise-downfall was captured on film; Between 1998-2010, she portrayed a wide array of roles across the silver screen in movies including: Mean Girls, Bobby, Herbie Fully Loaded, Georgia Rule, Machete, and Freaky Friday. Between rapid-paced film shoots, Lindsay Lohan also found time to record 2 Pop Rock albums for Casablanca, Speak (2004) and A Litter More Personal-Raw (2005).


Needless to say, Lindsay Lohan has gotten roped up in a lot of troubles and woes with the law over the last 3-5 years... a vicious cycle of drugs, arrest, court, rehab, "daddy issues," jail time [Repeat]. That's the pure basics of it - But Google that shit for additional info, if necessary. Towards the end of Summer 2010, Tri Angle Records released an interesting piece of work, Let Me Shine for You. This very multi-media statement came packaged along with the Witch-House comp:

Inspired in part by Lindsay Lohan's grotesquely fascinating black hole existence and in part by my unwavering belief in the power of pop music as an artform, I saw an opportunity to create something interesting with her music, and decided to ask some friends to re-interpret some of Lindsay's songs. "Tri Angle Records Presents: Let Me Shine for You" is the result. Even though we are all fond of Lindsay in our own ways, there is no FREE LINDSAY agenda here. We all love Pop Music and this is merely an experiment. All of our intentions are very sincere.

Lindsay Lohan's latest public backstep move is a spread in the January/February 2012 issue of Playboy. It's a "tastefully provocative" photo spread modeled after Marilyn Monroe's iconic layout in the magazine's 1953 inaugural issue. After Lohan's Playboy cover was leaked on Dec. 7th and the companion spread emerged earlier today... Hugh Hefner imminently decided to push the magazine's release date up from it's planned Dec. 15th shelf date. An exact re-scheduled release date has yet to be announced @ press time. Lindsay Lohan will reportedly still appear on "The Ellen DeGeneres Show" this coming Thurs. to discuss the $1 million set of images and related current events.

Posted by Matt Horowitz at 9:13 PM