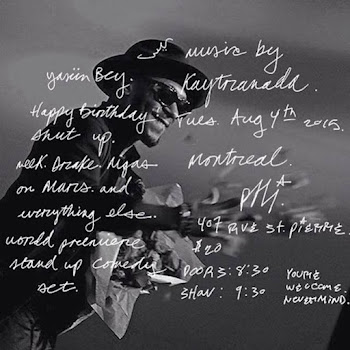 It seemed lie a pretty blatant, clear-cut call to arms to me when Brooklyn rapper-turned-actor-turned-stand-up comic Yasiin Bey aka Mos Def suddenly challenged any brave three-man posse up for the challenge to a battle rap-style cypher between himself, King Los, and Roots emcee Black Thought this past weekend; "me, Black Thought, and King Los vs. anybody e'erybody... battle anybody. [...] I'm tired of these dudes pretendin' like they dope. You alright, but relax. The dope n***as that think they dope — you ain't as dope as you think. You cool, but you ain't that deal. And we don't have to make no back-and-forth corny records about it." Although, for reasons unknown, Bey has since reneged his previously-incited battle rap challenge, which happened to fit right in, in light of Drake & Meek Mill's recent well-publicized beef. He's more of less accusing YouTube user and apparent affiliate rrvid718 of uploading said call to arms video message without, and even against, his consent. "Kick, Push" rapper and former Pharrell affiliate Lupe Fiasco was amongst the first emcees to offer to jump in the ring toe-to-toe with Yasiin Bey; "If Mos [Def] wanna battle, he can get a whiff of the wraith. And I'm behind all these bars don't need to tap Miller for some genuine drafts."


"It don't got nothing to do with Lupe [Fiasco] — Lupe, you're cool. Do your thing, man. There's no conflict over here, man... or bonanza... or spectacle that I'm going to provide in that way. I'm not interested in that at all, but much success to you," Bey recently phoned in to A Country Called Earth "activist, critic, and social media phenom," Ferrari Shepard. Full disclosure here: Mos Def is arguably one of my all-time favorite rappers and The New Danger is easily amongst my 'Desert Island Albums,' but I really don't understand why he called off his battle rap challenge so quickly... especially being such an experienced, veteran rapper. Let's just say, even if the initial Mos Def Battle Challenge "leak" was a pure accident or misunderstanding, I'm just a little curious as to why he wasn't able to keep up the charade long enough to battle against a few eager home-grown rappers, even if simply just for sheer sport. For what it's worth, Mos Def's long in-the-works G.O.O.D. Music "debut" has seemingly been completed and imminently shelved, along with his Zamrock-centric Madlib project and Mannie Fresh-produced OMFGOD(BKNOLA); "I played [Kanye] some new material and the whole song played and there was no words... he goes, "let me hear that again.'"

Posted by Matt Horowitz at 9:33 PM