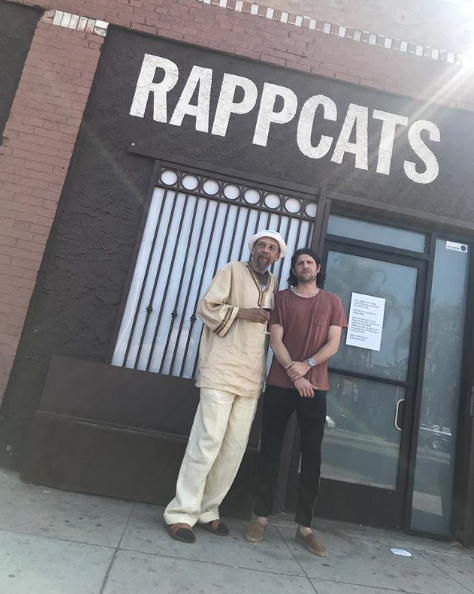 Greenhorn producer, song-writer, and composer Alex Goose has somehow already managed to log studio time with everyone from Weezer to up-and-coming Fool's Gold emcee Donnis and even had an ill-fated opportunity to work on Jay Z's famed Blueprint 3, which miraculously, ended up being one of his earliest career-defining moments; "In the spring of 2009, an A&R affiliated with Roc [Nation] got in contact with me. Shortly after, I had the opportunity to submit various tracks for Jay-Z's long-awaited Blueprint 3 album. Unfortunately, none of them made the final cut... This is what the Blueprint 3 could have been," Goose told okayplayer on the eve of his aptly-titled The Blueprint 3 Outtakes.

Six years later, Alex Goose has unleashed his next "solo" project under the creative umbrella of my former interview subject, Egon's Now-Again re-issue and found records imprint. Egon recruited Goose, who has recently produced radio-friendly hits "Thank God for Girls" and "Miss Jackson," to essentially strip down and re-imagine Madlib & Freddie Gibbs' critically-acclaimed Piñata album, as if it were chock-full of old school TV themes constructed utilizing Now-Again's immense back catalog-worth of age-old source material. Alex Goose and I touched on his Piñata Remix album, forthcoming work with new-comers Donnis, Foreign Air, and songstress Rodes, his now-infamous Blueprint 3 Outtakes, and a number of additional topic throughout the 12-question interview contained below.

(1) What specific artists, bands, albums, etc. would you most likely site as your greatest sources of influence on your overall sound as a producer and songwriter?

There's really a lot. But the first names that come to mind are Beck, Ennio Morricone, Serge Gainsbourg, Tom Wilson, RZA, J Dilla, Madlib, Quincy Jones, too many to name...


(2) What's the story with your collection of submitted, turned down and ultimately still released Jay Z beats, The Blueprint 3 Outtakes? Even though, they weren't utilized for his album, did you ever get any sort of feedback from Mr. Carter himself?

I had just graduated from college and was making mostly just Hip-Hop music at the time. One of Jay's A&R's heard my music on MySpace and contacted me. He gave me the opportunity to send in beats for his album. Unfortunately, they didn't make the album, so I released them as instrumentals. Jay never contacted me, but I heard through the grapevine that he did hear them.


(3) How would you account for your ability to effortlessly transition from working with underground emcee Kevin Gates to legendary Pop-Rock band Weezer?

I'm not sure if I can comment too much on my ability to do these sorts of things, but what I can say is that I love all types of music. It feels natural to work on different types of music because that's what I'm into.


(4) I've recently seen your name attached to Weezer's "Thank God for Girls" and Panic at The Disco's "Miss Jackson" how would you best describe your involvement in the creation of both tracks?

Both bands share the same manager, and my manager has a good relationship with them. He sent their manager the tracks and both bands took it from there. I wasn't in the room with them while they finished the songs. It was a label thing, for sure.


(5) okayplayer notes that "Rappcats has taken it upon themselves to remix Piñata in a made-for-TV fashion, brightening up its moody exterior by dipping into Egon's Now-Again Records catalog;" would you say that's an accurate description of your work behind the boards on Freddie Gibbs & Madlib's newly-revised Piñata?

More or less. The original idea for the project was to re-make the album only using pre-cleared samples so we could license the songs and instrumentals to TV shows, films, and commercials. After the project was done, we thought it would be a good idea to also officially release the album on Madlib's label [Madlib Invazion].


(6) How did your TV-themed Piñata remix album initially come to fruition? Rappcats notes that "Shame" was featured within Lebron James' Survivor's Remorse and I believe, even a Sperry Topsider commercial... who else has sought out your MadGibbs remixes?

A few TV shows as of now, but no brands quite yet. As of now, we've done about 5-6 licenses in the past 6 months. We thought it would be a cool idea to re-make the album using samples from the Now-Again catalog, which is very deep musically.


(7) How do you generally approach a remix project like Piñata or your Soundcloud-released Karmin Remix EP? Where do you typically begin when assembling a remix project re-built from the ground up?

I approach it as if I were just producing the original version. I want the make the version of the song or album that I want to hear from the artist.


(8) Rappcats' Piñata Alex Goose Remix mini-press release seemingly implies that you personally "made a custom run of a few hundred LP's for Madlib Invazion [that] took forever to make [and] won't be repressed." I’m curious to learn: what goes into the process of turning a recorded, or in this case remixed, release into a limited-run glossy piece of wax?

It's a tedious process. We only pressed up a limited run of vinyl. After we got the vinyl, I put together all of the copies by hand. This means inserting the record into the sleeve, stamping them, inserting the poster and download card into the sleeve. Then, hand-numbering everything. Then finally putting them in dust jackets. It was a lot of work!


(9) I understand that Egon allowed you access to the entirety of Now-Again's back catalog for use on your Piñata remix album. Are you able to share what sort of sample sources you ended up using for inclusion on the completed album?

Yes, I do. I sampled 17 tracks – everything ranging from Indonesian Psychedelic Rock to Nigeran Rock, and even Iranian Psych-Funk. It's all in there. Egon really has an incredible catalog of music that touches on just about every genre and emotion you can think of. It wasn't hard finding the right samples for this project. If anything, I was overwhelmed by how much good music I had to choose from


(10) It's nearing that time of year where many publications and blogs, including myself, are starting to compile best of or year-end lists. What would you likely categorize as some of your most-played releases of 2015, if you were to compile such a year-end list?


(11) What sort of projects, collaborations, albums, singles, etc. are you currently working on that we can likely expect to see come to fruition during the tail end of 2015-16?

My main projects right now are Donnis' new album, Foreign Air's album, and Rodes. Donnis has been out for a while, but he's really doing something different on this next one. We met earlier this year and have been doing an album together with some of our friends. It should be coming out on Fool's Gold most likely in February. The [second] thing is a new band I write/produce with called Foreign Air. We just released a new song called "Free Animal" that reached #3 on HypeMachine. The [third] artist I'm collaborating with is Rodes. She's a new artist from NY that is really amazing. She's got this 60's Psychedelic Folk thing happening and it's awesome. Look out for that in the new year.


(12) What kinds of dream collaborations do you have on your "wish list;" are there any that you could see being fully realized and recorded any time soon? How about any special vaulted and unreleased tracks that you would love to one day liberate to your trusty fan-base?

Probably Beck would be my first choice. As far as unreleased tracks go, I am doing an instrumental project/beat album that should be coming out in 2016 through Egon's label. It's more beats I've made using samples from the Now-Again catalog that have been [licensed] for commercials, film, and TV.