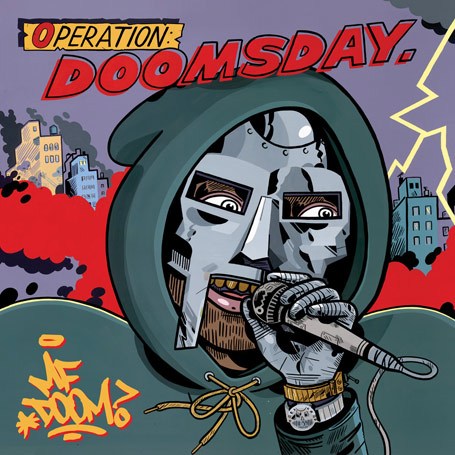 "If you are one of the few who have known about MF DOOM’s debut album since the year it first dropped (1999), you’ll know there’s been a few versions of the album to come out. There’s been bonus tracks, bootlegs, CD's, tapes, and even a lunch box edition. But here’s the thing about OPERATION: DOOMSDAY— it’s a Hip-Hop classic! Those who don’t have it, need it. The record keeps selling out, and they keep making more. Just like The Beatles, if The Beatles came to destroy Rap," Egon's Now-Again-affiliated online record store Rappcats wrote within a rather "villainous" press release. Egon's co-conspirator and revered Beatsmith-In-Chief, Madlib has had a particularly mysterious, light years ahead of its time, and oddly progressive relationship with the self-proclaimed METAL-FACE[D] VILLAIN since unveiling their lone collaborative project, MADVILLAINY, amongst the terribly unsuspecting world nearly 12 years ago. Now, upon Rappcats latest OPERATION: DOOMSDAY re-release in collaboration with Fondle 'Em and Metal Face Records, Now-Again have re-appropriated MM.. FOOD artist Jason Jagel's 2011 2-CD lunch box re-issue cover art, which somewhat suspiciously re-worked Stones Throw's in-house artist Jeff Jank's iconic OPERATION: DOOMSDAY cover image. I recently reached out to the Los Angeles-based Tumblr animator behind newly-unveiled unofficial "Gas Drawls," which although it wasn't initially sanctioned by DOOM's camp, "got the DOOM stamp-of-approval just last week." Now, what I've included below is a wonderfully descriptive, yet all-too-brief four-question micro-interview with "Gas Drawls" animator Dus T' Garcia; haphazardly coinciding with Garcia's DOOM-sanctioned 20th century-reminiscent animation, Rappcats, Metal Face, and Fondle 'Em Records have unveiled yet another cross-label 2-LP pressing of OPERATION: DOOMSDAY on black and red split vinyl with either Jeff Jank's original 1999 artwork or Jason Jagel's 2010-11 artistic re-work.


I. What made you decide to create your own "Gas Drawls" animation?

DOOM symbolizes everything sonically, culturally, and artistically— everything I love about Hip-Hop. I think a better question is: why wouldn’t I? My main goal was just being inspired by his legacy, his artistry, and his energy as a person. His whole discography [is] a vast mine of gems in dub sacks. My main goal though, was to give back to the Hip-Hop community. Hip-Hop has given me tremendous spiritual guidance and I guess, this is my way of giving back. That and also, I thought it would be really cool to dream if he actually got to see it.


II. From where did you get your inspirations for "Gas Drawls'" various scenes and overall stylistic, and in this case, rather villainous, feel?

The whole film was inspired from various sources. Primarily the culture and community of Hip-Hop, the art of Jason Jagel, and master craftsmanship of MF DOOM. I really wanted it to be as dense, intentional, and true to its source material. Many music videos tend to be really disconnected from [their] lyrical content or feel from the song. Plus, like many fan films, its usually a collage of different things that don’t match up with [the] source material. I wanted the video to feel as if DOOM directed it himself. From what I’ve seen though, I’m glad the Hip-Hop community [has] deemed it worthy and giving its source material justice. It was a sweet challenge.

I’m heavily inspired by early 20th century animation. Interestingly enough, much of early graffiti art was reminiscent of early animation. So, oddly enough, it all strangely connected well. Though, its something that just tends to creep on me. I was raised with a lot of old cartoons, so I can’t help it, I guess. It’s been ingrained into my DNA and jumps through my fingertips!

Since the DOOM mythos has much variation and multiple personalities, I felt it was important to give the film a multitude of styles that all still in some way, stand together in the same source. I think based on the response, the Hip-Hop community picked up on that [positively]. I guess overall, I was trying to re-create the experience of sampling, as DJ's did with breaks, and translate it into animation.


III. What made you pick "Gas Drawls" out of the vast selection of worthy tracks housed within OPERATION: DOOMSDAY?

"Gas Drawls” to me, encompasses DOOM. It best represents his sound, style, and even within its innovative, and sometimes prophetic feel, it still retains the OG spirit of the B-Boy. I also was highly mesmerized by the double entendres, and obscure references in this song. Spinning that track with its beat, I felt as if I was being told a music puzzle and I was able to interpret it through animation.


IV. Did "the DOOM stamp of approval" come directly from DOOM himself, Rappcats, Metal Face Records, or someone else from DOOM's camp?

I got a lot of buzz on my Tumblr for a post that was just an animation test for the film. It reached Jeff Jank from Stones Throw Records, who told me he liked it and asked me if there was anything he could do to help. The rest is history. Words can’t describe how ecstatic I was once I received word that DOOM himself saw the video. Definitely a memory that will never fade so long [as] I’m in this skin!

Posted by Matt Horowitz at 7:38 AM