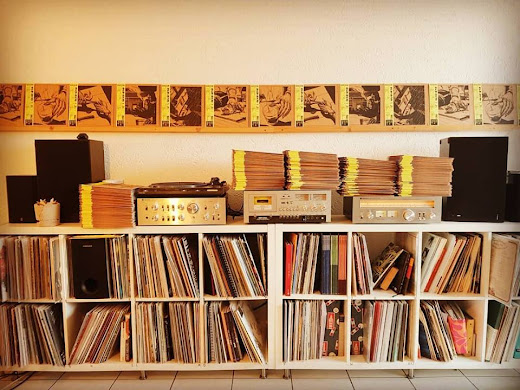 Moshuss & Hanses are are two new-comer producers hailing from Mannheim, Germany and their 10-inch vinyl, Poltergeist, is the first release on Fennek Records. Fennek is, in fact, run by Hannes AKA Hanses, along with Heinrich AKA Shaga—yes, we're all on a first name basis around here! It appears as though Fennek Records plans to continually release a series of limited edition hand-made silk-screened projects on 10-inch vinyl; again, their inaugural project, Poltergeist from Moshuss & Hanses is currently available in 5 different "cardboard" cover designs complete with OBI strips that are limited to 50 copies each with 250 copies available all together. Poltergeist consists of 24 Instrumental Hip-Hop beats all clocking in at abut 1-2:00 minutes or less, which were jointly composed and created by Moshuss & Hanses. Hannes & Lukas (Moshuss) went diggin' through an endless trove of both digital and physical source material, strictly limiting themselves to only using Japanese records. "We think it's cool to have a clear vision and topic for every physical record we release," Fennek Records' Heinrich recently told The Find Magazine.


"Like, in the case of Poltergeist: only Japanese samples," Heinrich further explained within The Find Magazine's New Label Love interview column. The Find Magazine (@thefindmag) actually, did an Instagram post over the weekend, which read: "J Dilla, Japan, Jazz & beats: today's new record additions, via @FennekRecords, @BlackGoldAmsterdam, @VillageLiveRecords & @Postpartum.Records" that was the first place I had seen or heard about Moshuss & Hanses' Poltergeist or even Fennek Records, for that matter. It appears as though another integral part of Fennek Records' behind-the-scenes team is CZOLK x MISM (@czolk) who will be designing all of the hand silk-screened covers for Poltergeist, as well as Fennek's upcoming batch of 10-inch releases. Honestly, that's what first caught my eye: the 5 stark "cardboard," almost comic book-like CZOLK-designed sleeves for Poltergeist. Moshuss & Hanses' Poltergeist is now exclusively available digitally and on 10-inch from Fennek Records' Bandcamp page while supplies last.


"How the album was made: Lukas and I decided to do an album together. We did not have a heading [theme] at that time, so we started to look out for interesting countries because we wanted to have a topic we could work on.

First of all, we wanted to sample Chinese music, but we couldn't find too much sample-able music from China and then, we switched to Japan. Via YouTube, we found lots of promising music (just to get an idea of what was possible) and we also, found out that just some weeks ago a record store had opened in Mannheim, which was specialized on Japanese music—jackpot! We used samples we found on vinyl and samples we found on The Internet.

A very important part for this album was to search for music and build a big library; especially, for the drums, [percussion], and SFX. Using Japanese samples only meant that we had to start from scratch. So, the bigger the library got, the easier it was to make beats in a technical way. We also, used software synthesizers for some melodies and basslines; especially, sub-bass—not easy to find on records!

We did simple "Loop Hip-Hop" (ie: finding a nice piece of music and looping it over and over) and we also, did a lot of chopping and re-arranging in our project. Some beats, we built together, but most of the beats are either Hanses or Moshuss.

Besides collecting samples, which is fun, making a beat most;y starts (in our case) by finding a melody, a chord, a piece of music you really like. Simply put: the main sample. Then, you start playing with it—chopping, pitching, using FX or whatever you like. After that, you build the beat around it. BUT, sometimes, you also, start with the drums or anything else. It depends."