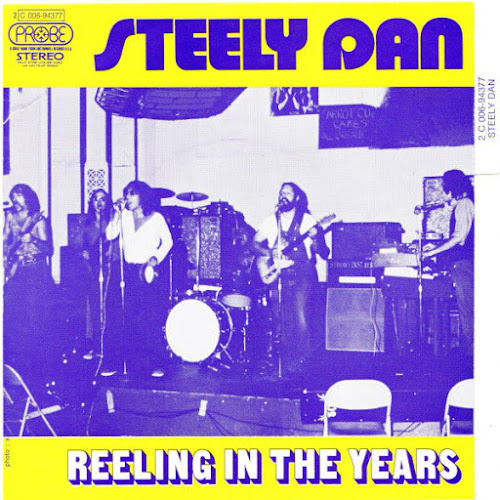 First and foremost, Steely Dan are great, but I can assure you, you've never heard them like this before! Here, we have a remotely-recorded Heavy Metal-tinged cover of Steely Dan's infectious 1973 single, "Reelin' In The Years" from their debut album, Can't Buy A Thrill (1972.) It was all orchestrated from self-quarantine by Two Minutes to Late Night's own Jordan Olds AKA Gwarsenio Hall/Doctor Mayor and Drew "Hollywood" Kaufman AKA Diet Hellboy. Two Minutes to Late Night's Facebook page describes the how as "a Heavy Metal-themed talk show featuring a corpse-painted host and the world's best House Band, Mutoid Man!" According to Stereogum Senior Editor Tom Breihan, Mutoid Man's Stephen Brodsky, also, leads Cave In and drummer Ben Koller plays with Converge & All Pigs Must Die. Last month, when these self-quarantine recommendations first started happening, Two Minutes to Late Night (2M2LN) and some musical friends posted a remotely-recorded cover of "Weird Al" Yankovic's "Dare to Be Stupid" from his 1985 album of the same name. 2M2LN have previously orchestrated covers of Thin Lizzy's "Cowboy's Song" & "The Boys Are Back In Town," Hot Chocolate's "Every 1's A Winner," Led Zeppelin's "Communication Breakdown," Van Halen's "Hot for Teacher," and more. Now, the Two Minutes to Late Night crew have returned with yet another similarly-minded cover!


This time, "Reelin' In The Years" features throughout from Nate Garrett (Spirit Adrift,) Lance, The King of Black Metal AKA Comedian Dave Hill (Witch Taint, Valley Lodge,) Chris Maggio (High On Fire, Wear Your Wounds,) Stephen Brodsky (Mutoid Man, Cave In, Old Man Gloom,) Marissa Nadler (Droneflower,) Nick Cageao (Mutoid Man,) and, of course, Gwarsenio Hall himself. It is, indeed, a Heavy Metal-leaning stomper, which duals as, yes, as rippin' cover of America's favorite Soft Rock/Adult Contemporary duo, Steely Dan. 2M2LN's "Reelin' In The Years" cover was edited together by Drew Kaufman, mixed by Bryan Batiste, and composed by Jordan Olds. Host Gwarsenio Hall & Drew Kaufman explain, "Hot Milk! We got a bunch of musicians to cover [and] to turn a Steely Dan zinger into a mosh legend from the comfort of their own bedrooms! This is our second bedroom cover made with the support of Patreon. With so many musicians stuck at home with no outlets, we're going to keep producing these style videos and use the Patreon to give some money to everyone who has a part in them." So, if you like what you hear here, you can head on over to Two Minutes to Late Night's YouTube page to either support their Patreon page or to find links to support the individual performers' artist pages.