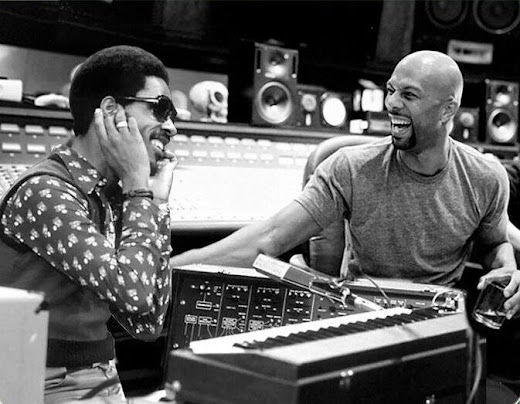 "Stevie Wonder's early use of synthesizers, drum machines, and samplers, in a lot of ways, paved the way for Hip-Hop and sampling. Part of my motivation for this project was to highlight those contributions," Nashville-based producer Amerigo Gazaway proclaimed within a recent press release. Gazaway is, of course, the genre-bending producer and remixer behind critically-acclaimed mash-up albums—are people still calling them "mash-ups?"—such as Yasiin Gaye: The Departure and The Return (Yasiin Bey FKA Mos Def & Marvin Gaye,) Fela Soul (Fela Kuti & De La Soul,) B​.​B. & The Underground Kingz: The Trill Is Gone (B.B. King & UGK,) Bizarre Tribe: A Quest to The Pharcyde, and more like-minded projects. It would appear as though Amerigo Gazaway is likely referring to Stevie Wonder's beloved and world-renown string of seven "classic period" albums released between 1970-76, which Rolling Stone readily admits "pioneered stylistic approaches that helped to determine the shape of Pop music for the next decade." RS's 2003-compiled 500 Greatest Albums of All Time countdown included four of Wonder's seven 70's albums with three cracking the Top 90. Late Registration-era Kanye had this to say back in 2005: "I'm not trying to compete with what's out there now. I'm really trying to compete with Innervisions and Songs In The Key of Life. It sounds musically blasphemous to say something like that, but why not set that as your bar?"


Common, formerly Common Sense, is the timeless alias of "Conscious" rapper-actor and Soulquarian Lonnie Lynn, Jr. who in addition to be a critically-acclaimed rapper and positive role model, has appeared alongside fellow thespians within films such as Smokin' Aces, American Gangster, Terminator Salvation, Selma, Suicide Squad, and was notoriously cast as Green Lantern in DC Comics' since-abandoned 2009 film Justice League: Mortal. For his proper album-length follow-up to 2015's B​.​B. & The Underground Kingz: The Trill Is Gone, Amerigo Gazaway has decided to painstakingly mash-up and sonically juxtapose Common's "The 6th Sense" from Like Water for Chocolate and Stevie Wonder's timeless Motown single "Superstition" from Talking Book as cleverly-titled "The Sixth Superstition." "Amerigo brings his imagined recording session to life with a slew of uncovered resources (including multi-track instrument stems, interview audio, and documentary soundbites.) Re-orchestrating deconstructed samples, the producer inter-weaves Common's vivid wordplay and Wonder's passionate vocals for a project that blurs the line between a "mash-up" and a modern day "duets" album," taking stylistic cues from Common & Stevie Wonder's "Black America Again" from Lonnie Lynn's 2016 Karriem Riggins-produced album. Though a proper release date has yet to be confirmed, it appear as though Amerigo Gazaway is currently assembling an album-length collaboration, fittingly titled A Common Wonder, displayed within the project's "official teaser" video; I have a feeling this one's gonna be a doozy and I seriously can't wait to hear what Amerigo Gazaway & The Soul Mates have cooked up this go-'round!

Posted by Matt Horowitz at 9:52 AM