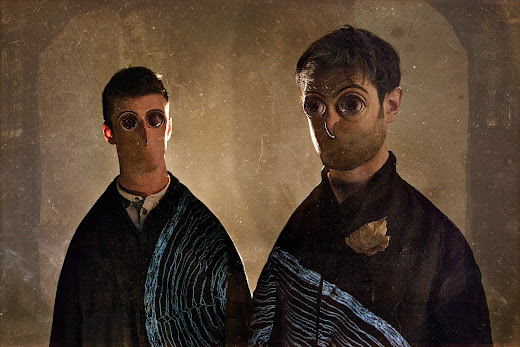 VTCN RADIO are a Parisian Electronic production duo consisting of Nathan Bokobza & Louis Martinez. Their Five to Six Records-released debut, Mydriase incorporates elements of Experimental, Dubstep, Downtempo, and "Modern Classical" music. "Mydriase is a concept album stemmed from the sonic explorations we led, while trying to find uncanny sounds or textures. We did not bother with genres or format and pushed our own abilities to express complex emotions through Electronic music," VTCN RADIO explained within a recent statement. Louis Martinez & Nathan Bokobza further detailed that each song on Mydriase "represents a different emotional state, while applying the same approach for sound design and composition." Bokobza is a Classically-trained 27-year-old pianist "fascinated by the romantic repertoire and the harmonic research of the impressionists," while Martinez is a guitar player who's "passionate about digital technologies and how to handle them [within] the sound-creation process." If pressed, I would liken VTCN RADIO's multi-layered Mydriase to recent works by fellow Electronically-inclined Indie Rock artists, such as James Blake, Disclosure, Jai Paul, Hot Chip, and even alt-J's phenomenal RELAXER. "The album's release marks the soaring of something we kept confidential for a while. It will remain the testimony of a mystical period of our lives. We really hope it will make you feel something uncommon. Thank you so much for listening," VTCN RADIO gushed. Mydriase really is an interesting, rather enchanting listen I would strongly recommend for anyone even remotely interested in the aforementioned artists or Electronic sub-genres. Mydriase is currently available to stream or download on Apple Music, Bandcamp, Soundcoud, Spotify, and like-minded digital retailers, as well as a limited edition 180 gram 2xLP vinyl package from VTCN RADIO's own Five to Six Records imprint.


"The dark and poetic "Riddle Song," released together with a music video, follows a young lady lost between her obsessions and her quest of letting go. "Late Night Shuttle," introduced by a colorful music-box melody, pictures a late-night escapade in the forest. Its steady rhythm along with the ever-morphing synth brings the listener in a state close to trance. Halfway, "Moon Motion" alludes to the moon's various positions around The Earth and their effects on people's mind. "Bucket List," ode the creatures of the sea, depicts a crystalline and almost frozen universe. Similar to wave's foam, the percussion resonates with the creature's singing. Through the intensive use of [folley] sounds and deep, hypnotic synths, the haunted "PCP" makes you travel in a Psychedelic world where the laws of gravity do not take place. The closing tune, "Wet Widow," sets a sweet feeling of nostalgia. The broken beat accompanied by a bewitching voice, brings you back to a safe and well-known place where your lost memories resurface and subtly drives you back to reality."