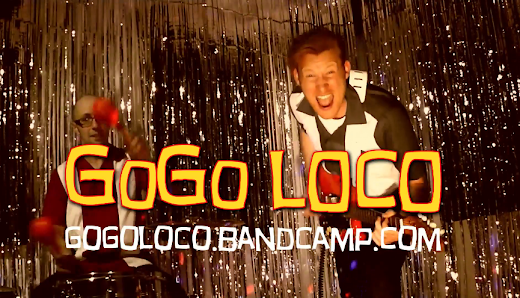 As you may well remember, The Witzard published a comprehensive 2016 interview with The Mobbs' extremely well-groomed frontman Joe B. Humbled to coincide with their fourth album, PIFFLE! on Dirty Water Records. Back in 2016, The Mobbs released PIFFLE! as well as a companion beer brewed by Hart Family Brewers fittingly deemed Pale & Interesting. I hadn't heard much from The Mobbs' drummer and general manager/press contact/booking agent Cheadle since late 2016, but still, assumed The Mobbs were together and actively working on their fifth studio album; however, this past weekend, I got an email from Cheadle, which read, in part: "Hey Matt! How are you doing? I'm sure you already know, but The Mobbs are no more... but before you get too upset, check out GoGo Loco, our new project!" The Mobbs quietly announced they were "gone" at the beginning of March with bassist The Bishop having announced his departure from the band for personal reasons. Effectively re-branding themselves as Cheadle GoGo & Joe Loco, The Mobbs' Cheadle & Joe B. Humbled have almost immediately returned to form as GoGo Loco.


Self-described as a "2-man maraca-driven Rhythm & Roll band," GoGo Loco have adopted a new sound that's a little more shaken, than stirred, as opposed to The Mobbs' more refined and gentlemanly brand of Garage Punk/Rock "N" Roll. Northamptonshire-based online magazine New Boots, who very recently interviewed Joe Loco, have deemed GoGo Loco's unique brand of groove-inducing music as Trash-Rock and readily compared their debut EP, The GoGo Loco Twist, to that of The Cramps' storied catalog. I would personally liken Joe Loco & Chadle GoGo's sound to Garage Punk/Surf Rock/Rockabilly—or as their Bandcamp puts it, "Trash Blues Rock "N" Roll"—with sonic benchmarks comparable to Iggy & The Stooges, New York Dolls, or even Elvis Costello & The Attractions. GoGo Loco's frantic 4-song debut EP, The GoGo Loco Twist EP, is currently available to stream or download on their newly-launched Bandcamp page. Joe Loco recently told New Boots, "if the battering down of doors happens, we hope to do a pressing in the form of a 7-inch vinyl EP" later in the year. Joe was "humble" enough to provide some additional commentary on GoGo Loco's The GoGo Loco Twist EP, exclusively for The Witzard.


"It was time to put to bed the monster that was The Mobbs. We'd had our fun and had quite a long run at it (nearly 10 years, to be precise.) GoGo Loco has been simmering in the pot for a little while now. Brendan AKA "The Bishop" handed in his notice in late 2017, which gave Cheadle & I the kick up the bottom we both needed. There is only so far one can go writing in a certain style, parading around in cravat and waistcoat and pretending to be a member of the Punk Rock gentry.

GoGo Loco is all about the rhythm, the beat, and the groove. Suddenly, we have the freedom to really get back to the primal routes of [Rock "N" Roll] with semi-abandon to technique and structure. Cheadle picked up the maracas in one of our early sessions, so we decided to stick with this, as it just works so well, in conjunction with the trashy/groovy feel—pealing from the strings of my 1960's Hofner guitar. We're huge Bo Diddley fans, so with this element and other similar influences that have been effervescing for so long, we're very happy and excited to be able to present to the world our 2-man rhythm and dance machine!"