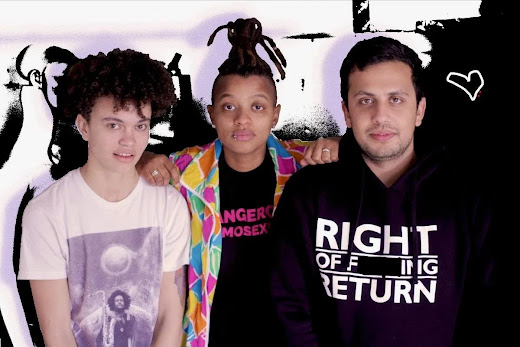 
The Muslims' back catalog currently includes their wonderfully-titled 2017 debut single, "Muslims At The Mall," a 2018 self-titled David Barrett-produced album, and most recently released collection of songs, MAYO SUPREME, on Don't Panic Records. While their opinions and political stances are far from untrue, MAYO SUPREME is definitely not for the light-hearted and The Muslims' own Bandcamp page re-assures, "THIS IS NOT A SAFE SPACE." Stylistically, I would personally compare The Muslims' MAYO SUPREME to something along the lines of 90's female-fronted Alternative Rock/Punk bands, such as Hole, The Breeders & L7, as well as Rage Against The Machine, Circle Jerks, Limp Wrist, and Arabic Hardcore Punks HARAM. MAYO SUPREME is currently available to purchase or stream from Don't Panic Records & Distro's Bandcamp page on either QADR-designed CD's or digital album, as well as your digital retailer of choice. I was able to ask QADR, FaraH BaHbaH & ABU SHEA a few vague "nuts & bolts & screws"-style questions concerning their backgrounds, MAYO SUPREME, sound, style, political stance, influences, sources of inspiration, views, etc. via email and they Replied back with the concise, bulleted and itemized list you now see below "the break."


• Three-piece Punk band from North Carolina; backgrounds of many diasporas.

• Style/Sound: classic Punk/Hardcore/Afro-Punk influence. Also, Folk and Classical and Hip-Hop and Sad Boy Punk and all the sh*t we listen to and like... We love interesting musical transitions, Right lyrics, and fun, crunchy sh*t that delivers.

• Inspired by the driving urge to change the world, ultimately. Stir some sh*t. Resist f***ed up narratives. Live our best lives and make space for drinking Modelo, loving thy neighbor, and organic farming.

• MAYO SUPREME: could be Hellmann's; could be a superiority complex; could be poorly seasoned chicken.