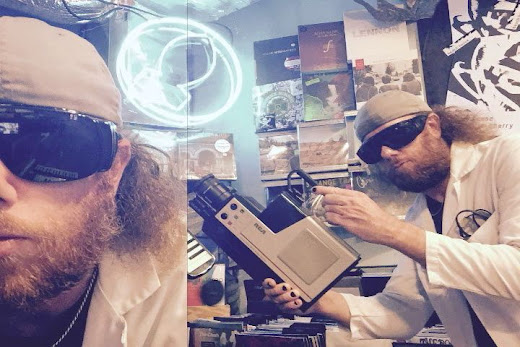 NOOB SAIBOT 1-4 is an upcoming series of releases from Joshua Rogers at Illuminated Paths/Broken Machine Films Presents... (or BMFP...) which I've, personally, been hearing rumblings about for quite a while now. I believe, I've been hearing about NOOB SAIBOT 1-4 from Mr. Rogers just about as long as VIPER & Broken Machine Films Presents... BOUT THA MONEY, both of which were fairly recently re-mixed/mastered by Dan "Height" Keech at Cold Rhymes Records. Joshua Rogers/BMFP... has a very unique cut-and-paste style of creating Hip-Hop, Vaporwave, and largely genre-eschewing music culled from a nearly 20-year vault of original production work curated/created by Mr. Rogers himself; using "strictly cassette-to-cassette and VHS/record-to-cassette manipulation and layering, utilizing only vintage tape decks and medium," much like BOUT THA MONEY. NOOB SAIBOT 1 was quietly released by Illuminated Paths on Friday, August 30, 2019 with NOOB SAIBOT 2-4, reportedly, soon to follow. For all intensive purposes, this very feature showcases "Make These Tunes" (Alt. Mix) [w/ Height Keech & Emceein' Eye] & "Too Much Paranoia" [w/ Darko The Super], as well as a "NOOB SAIBOT 1 AVAILABLE NOW PROMO I 2019" video below.


"With Broken Machine Films Presents... at the production helm and Height with the mastering prowess, NOOB SAIBOT 1 is finally here. After almost 5 years in-the-making and 20 years curating/creating. The first of its kind fusion crossover of Hip-Hop meets Vaporwave. A plethora of artists both above and Underground, ones that have so inspired and awed, not only myself and small back alley stages, but artists that have engaged the world at large. From Hip-Hop/Rap to Vaporwave. Assembled exclusively for this 4-part cassette series.

This first run hand-made and sealed tape version of NOOB SAIBOT 1 has amazing themed double-sided artwork by Yung BALENTS (with a sneak preview of the artwork from the upcoming NOOB SAIBOT 2.) Plus, contains hidden messages, alternate effects, bonus samples, and an exclusive cassette-only track of deleted skits, instrumentals, drops, beats, and guest spots that include Dustin D. Fingers and a Super-Secret Mystery Artist! HOOKED UP. Limited to 50. NOOB SAIBOT 2, 3 & 4 COMING SOON!"

Posted by Matt Horowitz at 9:07 AM