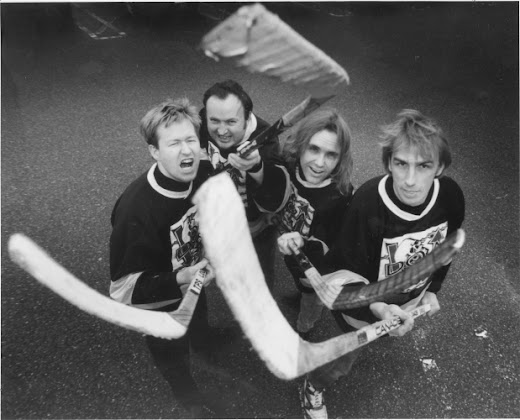 D.O.A. is a Canadian Punk/Hardcore band who are often credited with coining the term "Hardcore" on their sophomore album, Hardcore '81. D.O.A.'s current line-up consists of founding member Joey "Sh*thead" Keithley, Paddy Duddy & Mike"Maggot" Hodsall. Although, past line-ups of D.O.A. have included Randy Rampage, Chuck Biscuits (Black Flag, Danzig, Samhain,) Brian "Wimpy Roy" Goble, Ken "Dimwit" Montgomery, Jon Card (SNFU,) Dave Gregg, Ken "Kenny Hanson" Jensen (The Hanson Brothers,) Floor Tom Jones, Harry Homo, John Wright (Nomeansno,) and more through their 42-year career. D.O.A. have often advocates for those without a voice and have played benefits for Rape Relief, anti-racism, Rock-for-Brains, anti-globalization, OXFAM, First Nation's rights, anti-censorship, and environmental causes, amongst many others. Film-maker Scott Crawford is currently hard at work on a documentary entitled Something Better Change set to chronicle frontman Joey "Sh*thead" Keithley's rise from Punk/Hardcore pioneer to City Councillor in Burnaby, British Columbia, Canada and Chair of The City Environmental Committee, as well as campaigns for Mayor and The Green Party. For this latest installment of Guts of The Ice, we were fortunate enough to land an interview with Councillor Joe Keithley, which you can now read below. D.O.A.'s eighteenth studio album, TREASON, is now available on their own label imprint, Sudden Death Records.

01. How did you first get into both hockey and Punk/Hardcore music?

Joey "Sh*thead" Keithley: I saw [Bachman-Turner Overdrive] wearing Canadian football league jerseys in 1986 and the idea occurred to me to amalgamate Punk and hockey. All of us in D.O.A. played a lot of hockey when we were kids and we continued to play "beer" league hockey as adults. I thought hockey is perfect, it's just like a band: I'm the singer, so I will be The Center, the bassist and second guitarist will be The Wingers, and the drummer is The Goalie. The next step was to form a team, so all the D.O.A. guys and friends and roadies formed The "D.O.A. Murder" Squad and squared off against teams from TV and radio stations and local newspapers. We always played the games as benefits for The Vancouver Food Bank. So thus, Hockey Rock or Punk Hockey was invented; we played 15 of these benefit games over the years and only lost once. It was funny, Bad Religion kept talking about how their team was the best, so one time, they came to Vancouver and they teamed up with SNFU. Well, we beat them 13 to 1. After the game, we laughed our [guts] out.

02. For fans new to the "Puck" Rock/Hardcore sub-genre, which release(s) from throughout your discography would you recommend starting out with? 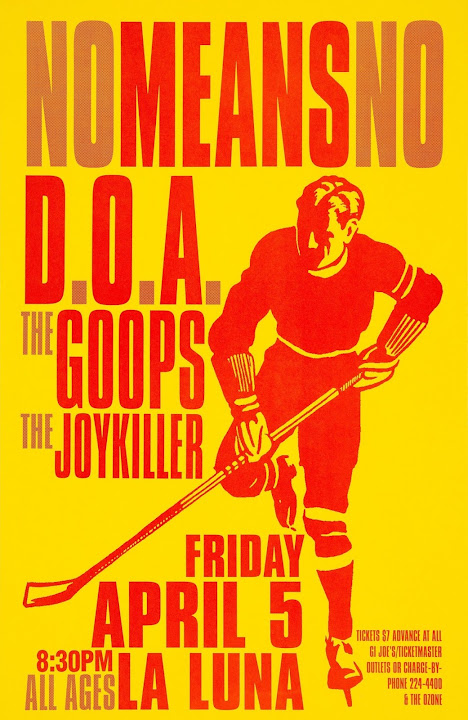 03. Aside from your own band's music, what other hockey-themed groups, releases, singles, etc. would you recommend, as well?

Keithley: Well, certainly The Hanson Brothers. Good band, but they did not have much of a team. We beat them pretty badly, as well.

04. If still active, what are the future plans for your band? If currently inactive, do you have any immediate plans for any special re-issues or a proper reunion/comeback?


05. Would you mind talking a bit about the story behind/making-of the music video created for your cover of Bachman-Turner Overdrive's "Takin' Care of Business" from 2009's Kings of Punk, Hockey & Beer?

Keithley: Yes, we were recording the song in 1986 for the album True North, Strong & Free and the word on the street was that we were recording ["Takin' Care of Business."] I was at home and the phone rang. The voice on the other end said: "Hey, this Randy Bachman. I hear [you're] recording one of my songs." I thought it was a roadie playing a joke, so I told him to "f**k off" and I hung up. The phone rang again and it was Bachman. He said, "Hey, don't hang up. This really is Randy Bachman!" So, we met and he came on stage with us a show and played ["Takin' Care of Business."] So, when we shot the video for ["Takin' Care of Business,"] we asked to play The Coach. He's a good guy.

06. How did your German-only "Beat 'em, Bust 'em" B/W "Can't Hide The Heino" Saw Blades series split 6-inch with The Hanson Brothers originally come about? What was your relationship with The Hansons (Nomeansno) like at the time of its release in 1997?

Keithley: The single came out on Empty Records (Germany,) who Sudden Death was working with, at the time. Always been good friends with the Nomeansno guys (Hanson Brothers.) Back in 1979, The Wright Brothers had their first Punk Rock experience at a D.O.A. show in Victoria, where Chuck Randy & I challenged (from the stage) a bunch of lunkheads [who] wrecking the show. The lunkheads ran off and the event left a big impression on those guys. Then, in 1986 and '87, D.O.A. took Nomeansno along as support on their first [North] American tours. They are great guys and The Hansons were a cool extension of that.