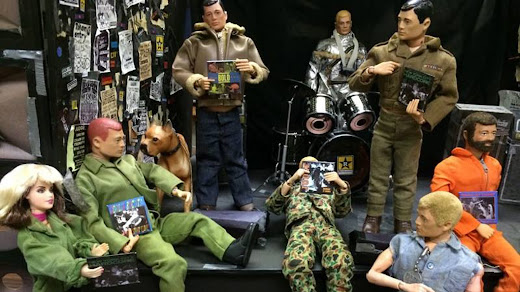 Revelation Records is an American Hardcore/Punk label founded in 1987 by Jordan Cooper & Ray Cappo (Youth of Today) who parted ways with the label in '88 to focus on Shelter and start his own imprint Equal Vision Records. Revelation was first started in New Haven, Connecticut and is now based in Huntington Beach, California with sub-labels including Crisis Records, Down to Earth Records, Revelation Distro, Revelation Europe, and RevHQ. Revelation Records, along with the bands they issued through the late 80's, are often credited with creating and cementing the "Youth Crew" sound, as well as New York Hardcore, which helped bridge the gap between the formative bands of almost a decade prior and helped carry the sub-genre through the early 90's. In addition to a constant stream of Hardcore/Punk releases, Revelation Records issue a weekly newsletter dubbed RevHQ Update, which includes a REVHQ FUN FACT. As a matter of fact, the inaugural installment of Guts of The Ice; Crippled Youth - Join The Fight 7-inch (1986) primarily used REVHQ FUN FACTS. We've been communicating with David "Igby" Sattanni, Jordan Copper, Adam Lentz, and Sammy Siegler all these weeks while publishing Guts of The Ice. Following Guts of The Ice #1, we reached back out to Revelation Records and Jordan Cooper himself provided us with some additional hockey-themed REVHQ FUN FACTS, which you can now see re-published below. Additionally, this will be our last mention of SL*PSH*T, as they aggressively refused our interview requests. Revelation Records recently launched a brand new RevHQ web-store, which features a plethora of merch, information, playlists, etc.

12/31/10
---------------------------
REVHQ FUN FACT
---------------------------
Legendary Boston Hardcore band SLAPSHOT are known for their in-your-face (no pun intended) lyrics, energetic live shows, and, possibly, most of all, the hockey stick handle wielded on stage by frontman Jack "Choke" Kelly. What you might not know is that the on-stage hockey stick, actually, evolved from one of Choke's earlier bands, Negative FX. At a show Negative FX played in New York in the early 80's, Choke tore the ligaments in his knee, landing him in a cast. After the cast came off, he was worried about re-injuring himself, so when the band played live, he would use the top of the mic stand to whack people, if they tried to pile on him to sing along, etc. Choke's use of the mic stand lasted through his next band, Last Rights, but, later, when SLAPSHOT formed, he decided to use part of a hockey stick instead, which tied in to the band's name, obviously.

10/07/11
---------------------------
REVHQ FUN FACT
---------------------------
Last week, we told you about the origin of the photo on the cover of the Negative Approach Tied Down LP. This week, we carry on with the same theme, but reset our sights from The Midwest to The East Coast. Originally intended to be released with a completely black cover with no artwork on it, the SLAPSHOT Same Mistake EP, actually, became the first time the classic SLAPSHOT "hockey mask" logo was used on a release. The band, who wanted to have nothing on the cover, was asked by the label releasing the record to try to come up with something to use on the cover, instead of just having it plain black. According to someone who played in the band for a while, Mark McKay from SLAPSHOT came across an ad in a TV Guide for the classic Horror film Friday The 13th that was being shown on a local station. The image of the hockey mask was taken right out of the ad for the film and used as the cover of the record and the rest, as they say, "is history." The puzzling thing about this story is that the SLAPSHOT mask is clearly not the same mask as the one used in any of the Friday The 13th films that we're aware of, so it appears that someone involved in that TV Guide ad took some creative liberties with the "Jason" mask.

Russ Rankin, vocalist of Good Riddance & Only Crime, worked as a hockey scout for The Kootenay Ice and now, works for The Tri City Americans. Both are major junior hockey teams in The Western Hockey League.

Former goalie for The Montreal Canadiens, Jose Theodore, is a big fan of NOFX and once played guitar on stage with them at a show in Montreal.

POWER TRIP gets played over the PA at Anaheim Ducks & Calgary Flames games.

Bo Thompson, former vocalist for Donnybrook! & Snakeyes, has a cousin named Mitch Callahan, who once played for The Detroit Red Wings.

Joey Sh*thead from D.O.A. released hockey-themed compilations on his label, Sudden Death [Records] (which, itself, obviously, got its name from hockey.)

Drew Stafford, Boston Bruin (formerly of The Buffalo [Sabres] & Winnipeg Jets) appeared in the Every Time I Die video for "Decayin' with The Boys," playing Jenga at a party in full hockey gear.

Posted by Matt Horowitz at 9:15 AM