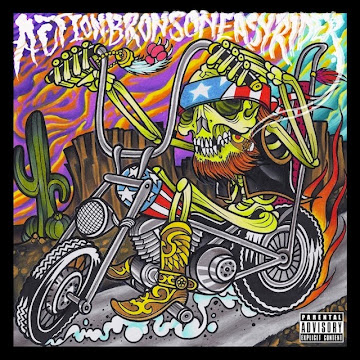 "The album is sounding incredible. The whole album is a standout. I don't care about individual songs, I'm trying to make a complete, classic project. I just do my music uninfluenced by anybody else, or current trends, and it comes together at the end," Action Bronson recently told online publication NME about his approach to recording his long-rumored VICE Records debut, Mr. Wonderful. "Nothing needs to have a f*cking theme all the time. This is just rap. I'm not trying to make people think I'm some sort of scientific wizard or inspirational poet. F*ck that! It's just happy, funny, rugged, rough rap," which almost perfectly describes Bronson's care-free aesthetic to his chef-turned jet-setting rapper Hip-Hop career. While he's been playing it live for a month or so now, Action Bronson's major label single, "Easy Rider" leaked online Monday afternoon; he previously performed the track at Peter Rosenberg's Peterpalooza 2014, which Rosenberg sporadically premiered on his weekly Sunday night Hot 97 show and then a low-quality radio rip went viral the following morning. "'EASY RIDER" OFF MY DEBUT ALBUM *MR. WONDERFUL* FULL CD-Q AND ART WILL BE OUT [TUESDAY]. This is the first song I've put out all year. I'M BACK," @ActionBronson Tweeted late Monday night. Presumably a clever allusion to the track's namesake, Dennis Hopper & Peter Fonda's 1969 cult classic film, Bronson repeatedly professes that he wants to "ride the Harley into the sunset" over Party Supplies' meandering guitar-accented Middle Eastern Jazz-influenced backing track. It's reassuring to hear that Action Bronson's prior fearless tendencies to attempt to rap over almost anything from Peter Gabriel to Guns N' Roses seemingly hasn't changed one bit since signing to a major label like Atlantic/VICE Records. Bronson's Billboard Trending #2 smash-hit "Easy Rider" is now available for your streaming pleasure at VICE Records' sister-site, MUNCHIES or for download from iTunes and other digital retailers... a companion all-American music video should be released fairly soon, while Mr. Wonderful is expected to see a world-wide release, if not this year, then in early 2015.