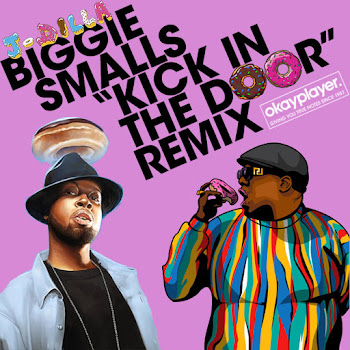 "Consider it a gift from us to you, who yearn for the Dilla-fide treats wherever, however you get them. So, grab yourself one of those delicious donut holes, put your feet up and bless the air to this certified heater from the gawd, every bit as sweet as the day itself," okayplayer's own "Voodoo & Old Donuts"-inspired wordsmith Michael Eric Gonik (@zogotsoul) transcribed within a National Donut Day-centric piece published prior to the weekend. Gonik is of course, referring to Biggie Smalls & J Dilla's posthumously-released collaborative remix, "Kick In The Door," which until now, has never seen a fully untagged, full-length release; it's something of fabled Hip-Hop Holy Grail to 99.9% of digital "crate"-diggers and Dilla completists, like yours truly. Rumor has it that Biggie & J Dilla had initially intended to collaborate in the mid-90's on a Jay Dee-produced Busta Rhymes track tentatively titled "The Ugliest" aka "Dangerous MC's."


Despite its sheer colossal hit-making potential, Biggie's semi-combative verses were reportedly aimed at then friend turned bitter rival [read: "frenemy"] 2pac, an ever-growing beef which Busta didn't particularly want to get involved with, so the track was shelved and ultimately withheld from a proper release. However, "The Ugliest" would in fact, later end up re-surfacing on Biggie's posthumously-assembled album, Born Again (1999) with a Nottz-produced beat instead of Dilla's, but the original version can be found online with a little bit of persistent diggin'. Not entirely unlike "The Ugliest/Dangerous MC's," J Dilla's characteristically out-of-sync "Kick In The Door" (Remix) has thus far only seen a very limited release; first appearing on DJ Soul's okayplayer-hosted 20-track Assorted Donuts tributary one-track mixtape (2007). Damn, listening to this piece of pure sonic gold, one can only imagine what sort of neck-snapping nuggets these two fallen Hip-Hop luminaries could have cooked up together, had their poetically-accented lives not been cut short way too soon.
Posted by Matt Horowitz at 12:48 AM