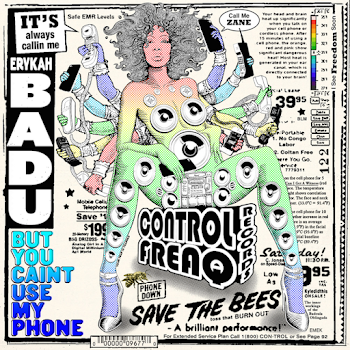 "I'm writing all the time, but recently I got the bug back. When it comes, it comes, and I can't force it, but... I got it back with "Hotline Bling" and all the other things I've been experimenting with," Erykah Badu recently told Noisey concerning her five-year gap between New Amerykah Part 2 (Return of The Ankh) and just-released But You Caint Use My Phone; a clever allusion to Badu's own widely-acclaimed 1997 Live single "Tyrone," in which she famously laments, "you need to call Tyrone... but ya can't use my phone." "HOT LINE BLING BUT U CAINT USE MY PHONE MIX" (now re-titled "Cell U Lar Device") was initially conceived as an impromptu birthday present for a friend of Erykah Badu's with assistance from Dallas-area producer Zach Witness, better known locally as one White Chocolate. "When I thought about doing the "Hotline Bling" remix, I thought about him. And the same week, he came to one of my events in passing and we exchanged phone numbers. And the next week, we were in his bedroom studio, we did the whole project in 11 days," Badu revealed to newly-minted Beats 1 radio host Zane Lowe. "[He] produced, reproduced some other thing, mixed, and mastered, he mastered the project in two days. I did vocals one take for each song. Amazing," a frenzied Erykah Badu continued to gloat about her cell phone-themed mixtape collaborator.


Despite the fact that multiple media outlets initially reported the presence of three uncredited André 3000 and Drake features, it was soon revealed that the latter was in fact a rather convincing Drake sound-alike verse delivered by ItsRoutine aka Atlanta-bred emcee Aubrey Davis. It seems even more suspect when you take into account that Erykah Badu & Drake have seemingly forged a well-documented friendship and mutual admiration for each other in recent years. But You Caint Use My Phone's Todd Rundgren-sampling album closer, "Hello" employs a flawless half-sung/rapped assist from Badu's ex-boyfriend and father of her teenaged son 7 Benjamin, André 3000. "[Zach Witness] expertly weaves Erykah Badu's trademark soulful vocals with psychedelic soundscapes, Hip-Hop-inflected beats, smooth R&B, Jazz, Art-Rock, and found sounds into a new genre Erykah describes as TRap & B," reads a self-contained Control Freaq album press release. Following a few since-fixed technical SNAFU's, But You Caint Use My Phone is now available to purchase for a mere $7.99 as an Apple Music/iTunes exclusive until December 4th, after which it will become available on a multitude of digital platforms. Erykah Badu is currently accepting phoned-in fan calls on her self-described "burn out" phone at album art pieced together number, (214)-374-3995; "call me and tell me how we should spend the proceeds from the mixtape," @fatbellybella recently wrote to her trusty, patiently awaiting fans on Twitter.

Posted by Matt Horowitz at 8:59 PM