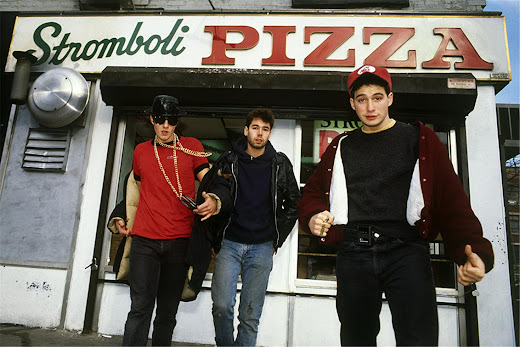 "I'm a huge Beasties fan and have been since I was a kid. Coming out of Hip-Hop and crate-digging culture, I'd always find records like The Moog Machine's Switched-On Rock (1969) and Led Zeppelin IV (1971) that The Beasties had sampled. As I was going through the BEASTIE BOYS BOOK, I noticed in a few chapters, they'd talk about the mixtapes that they'd make and trade with samples, skits, weird Jazz records, and stuff. I remember a great interview that Wax Poetics did with The Beasties years ago that mentioned these tapes, as well. I figured I could make a playlist equivalent.

The early chapters of the book are fascinating to me, as well. They really capture this culturally-rich time in New York in the late 70's/early 80's when you had early Hip-Hop like DJ Jazzy Jay and The Zulu Nation playing at The Mudd Club, as well as No Wave/Post-Punk bands, like Sonic Youth and Arto Lindsay's DNA playing Punk clubs and art galleries. The mixtape aspect of their history is really fascinating to me because it seems as though, they'd make tapes that corresponded with the albums they were working on. Kind of a way of pulling together whatever was influencing them, at the time. I have a similar process when making music, which I may have stolen from them."

"Throughout the BEASTIE BOYS BOOK, Mike D & Ad-Rock speak highly of this song and for good reason, it's perfect! Besides being an incredible group, The Treacherous Three are significant because stylistically, they represent a bridge between the original "routine"-based MC'ing style of groups, like Cold Crush and the more "lyrical" styles that would come later. They were a big influence on The Beasties and pretty much everyone else who came out in the 80's and early 90's. Its also, worth noting that "Body Rock" was produced by Erol "Pumpkin" Bedward, a drummer/multi-instrumentalist who is considered by many to be Hip-Hop's first super-producer."'

"In high school, I used to review records for Punk 'zines, so I have a little bit of knowledge about Punk's development as a culture and musical style. That being said, Bad Brains is a mystery to me. Like, I know where they came from, but I don't know how they came about, you know? This sh*t is still so next level, 40 years after the fact.

I heard H.R. lives in my neighborhood now, but I don't know if that's true. A couple years ago, I went to BBQ/Punk show and the host announced that H.R. would be joining the band to play a few songs and people got hyped and starting chanting "H.R...... H.R..... H.R...." but when the guy grabbed the mic, he turned out to be some other dude and not H.R. at all!"

"Everybody knows the famous Led Zeppelin song that The Beasties sampled those massive drums for their song "Rhymin' & Stealin'" but not a lot of people know the original "When The Levee Breaks," which is credited to a Louisiana-born guitar virtuous named Memphis Minnie. The song was recorded in 1929 and just goes to show how many deep and old connections come alive within Hip-Hop through sampling."

"I've been a huge Luscious Jackson fan and this song was my introduction to them. I remember being at my cousin's house and seeing the video for "City Song" on MTV. There were these beautiful, hip grown-up ladies playing this Funky music and it blew me away. Back in the mid-90's, anything that was abstract or alternative sounding with samples or breakbeats on it was bound to be at least someone cool (Beck, Forest for The Trees, Whitetown, Land of Loops, etc.) I included the Todd "T-Ray" Ray remix because he's kind of an unsung figure in 90's Hip-Hop. He produced a lot of dope, grimy tunes for Artifacts, Kool G. Rap, Cypress Hill, and more."

"This is, arguably, my favorite Beastie Boys song. I remember hearing it when it came out and being struck with the feeling that I had been transported into a deep emotional space. It's an incredibly complex production for it's time, the synths sound like farfisa's and the drums sound like chopped and pitched up Amen breaks. It's quirky and futuristic and stylistically, it fits in perfectly with all of the music The Beasties were releasing on Grand Royale, at the time. Ultimately, "And Me" is some B-Boy sh*t, but it's more than that kinda like The Beasties and Hip-Hop itself."


John Morrison is a Philadelphia-based DJ, producer, and writer (Red Bull Music Academy, Jazz Right Now, Bandcamp Daily, etc.) His debut Instrumental Hip-Hop album, Southwest Psychedelphia, is a cosmic, psychedelic trip through a day in the life in his Southwest Philadelphia neighborhood available now on Deadverse Recordings. John is currently working on his follow-up, Memorabilia, a remix album centered around childhood and nostalgia.