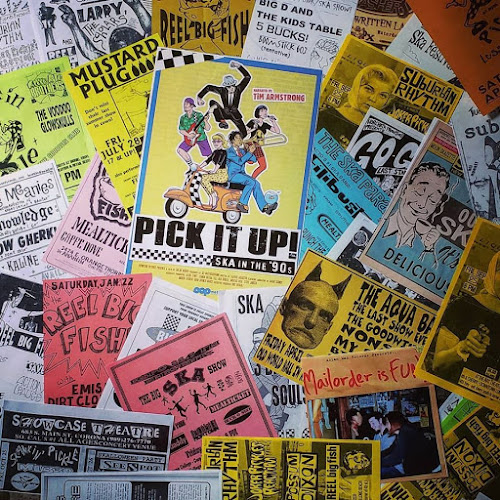 Pick It Up! Ska In The 90's, which is being billed as "the definitive Third Wave "Ska-cumentary'" (AKA a Ska documentary) is now available on DVD, Blu-Ray, digital, etc. Whether they're presently aware of it or not, anyone from about the age of about 28-45 should have either vague or vivid memories of Ska/Punk in the 1990's; most people are familiar with either No Doubt, Less Than Jake, The Mighty Might Bosstones, Reel Big Fish, or Rancid/Operation Ivy. 90's Ska is commonly known as Third Wave Ska, following in the traditions of both First Wave Jamaican and British Two-tone/2 Tone Ska through the 80's. For me, personally, I would say one of my earliest memories of Ska was hearing Goldfinger's "Superman" on the in-game soundtrack for Tony Hawk's Pro Skater (1999) which, also, included selections form Dead Kennedys, Primus, Suicidal Tendencies, The Suicide Machines, and The Vandals. Pick It Up! was directed/produced by film-maker Taylor Morden, who has previously created documentaries, Here's to Life: The Story of The Refreshments and The Last Blockbuster, as well as shorts Gotcha, The Pick Up, and Sticker Shock.


Pick It Up! Ska In The 90's features first-hand accounts and commentary throughout from members of No Doubt, Reel Big Fish, Less Than Jake, Rx Bandits, The Pietasters, Fishbone, Save Ferris, Let's Go Bowling, Dance Hall Crashers, The Specials, Mustard Plug, The Toasters, Skankin' Pickle, Hepcat, The Slackers, KEMURI, blink-182/The Aquabats, The Hippos, The Skatalites, Sublime, and many more with narration from Rancid/Operation Ivy frontman Tim Armstrong. I was fortunate enough to recently receive a digital screener of Pick It Up! from Mike Cubillos from Earshot Media and without giving too much away, let me tell you: this is a truly phenomenal documentary, whether you are/were a fan of Ska in the the 1990's or not! Morden and his collaborators tell their stories with so much passion and intensity, which I would assume is why Ska has remained alive and well almost 60 years since its initial conception in Jamaica. Below, you will find a comprehensive 117-song Pick It Up! - Ska In The 90's companion Spotify playlist assembled by film-maker, Taylor Modren. Critically-acclaimed documentary, Pick It Up! Ska In The 90's is now available to own on DVD, Blu-Ray, digital, and super-limited edition VHS. It will, additionally, be screening as part of the Ska Parade 30th Anniversary Tour from January 18-February 1, 2020.

Posted by Matt Horowitz at 8:43 AM