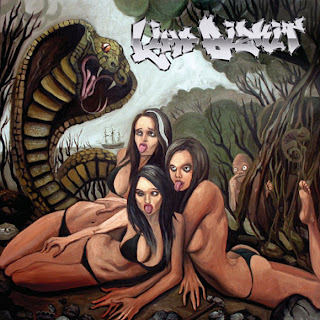 #Wes Borland Artwork
After many great success/failure, hiatuses, line-up changes, break ups, and reconciliations... Limp Bizkit are back! The original line-up of Fred Durst, Wes Borland, John Otto, Sam Rivers, and DJ Lethal has fully re-formed for the first time in roughly 10 years. During their initial run (1995-2000), Limp Bizkit released 3 successful albums - Three Dollar Bill, Yall$, Significant Other, and Chocolate Starfish & The Hot Flavored Water.* They were equally loved/hated by many... Often credited with creating the Nu-Metal/Rapcore genre.
The 2 releases which followed Chocolate Starfish..., Results May Vary and The Unquestionable Truth (Part 1), were missing the signature sounds of Borland and Otto, respectively. In-the-works since 2009, Gold Cobra has reported been fully recorded 3 separate times, with this most recent version alone mixed and mastered by a number of various studio techs. Following a series of repeated delays, Interscope/Polydor will finally unleash Gold Cobra this coming June 28th. There will be 3 differently configured US/UK versions of the album, including anywhere from 13-17 tracks ("Combat Jazz" as #17 in Japan). The album was produced by Durst/Borland and Dave Schiffman (mixer)... Features may very well include: DJ Mathematics, Paul Wall, Gene Simmons, Raekwon, and Lil' Wayne.