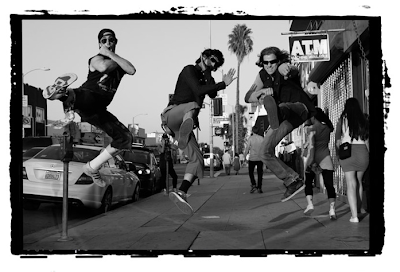 Over the course of the past few months, I've gotten in touch with California's very own EdstanleY. Over the period of time since, I've also managed to establish a working relationship and friendship of sorts with Scott, Justin, and Dave. It's been one hell of an experience thus far, guys! Here, my friends, are the results of an emailed interview which together... we drafted, sent, and conducted:


(1.) So, what are the band's origins? How did you guys meet? What drew you to each other?

Scott and Dave actually met in college at Arizona State University... After graduating, Scott had realized that he didn't want to pursue the typical 9-5 life, so he packed his bags and moved to California to live with Dave on his kitchen floor in Huntington Beach, CA... while living a few blocks from the beach, Scott and Dave became friends with Justin who lived right next door... The three of us realized that we had a common passion for playing and creating music and decided that we would form a band and start pursuing our passion.

(2.) What does the name "EdstanleY" really mean? Or is it Top Secret? ha. If so, I'll let you guys off the hook... But I personally, think it's great! It really works well as one entity (I like the way it's stylized, too!) Am I getting close?

Haha, it is definitely Top Secret! Sorry, can't give the answer to this one... Hehe, kidding, of course. We named the band EdstanleY in honor of a neighbor that lived right next door to the three of us in Huntington Beach... His name... Ed Stanley. From the very beginning he encouraged and supported us in our pursuit of our dream… He is a musician as well and had a drum kit, guitar amps, bass amps and PA in his apartment... He helped us build a studio in Dave's garage below our apartment and he donated all of his equipment to us to use in the studio... He is not only the name our band, he is a huge supporter and true friend to us and will be forever.

Swirl, with nuts on top. Maybe a little whipped cream.

Most definitely Tupac... Not only was he an incredible rapper, he was a true poet, a revolutionary, a leader, an activist and a true artist... He is one of Scott's biggest influences in this life.

As a band we are most definitely influenced by a wide range of musical influences... Nirvana, Metallica, Cage The Elephant, Rage Against the Machine, System of a Down. Dave by a lot of Punk music, Pennywise, Bad Religion. Justin by a lot of Dance music. Scott by great songwriters, Bob Dylan, Paul Simon, Tupac, The Doors.

(6.) What are some of your current listenings? As a Music Journalist, I'm always interested in finding new bands… Can you guys point me in the direction of any prospects?

Right now, we LOVE Cage the Elephant... Absolutely incredible... A bit of Shinedown, The Heavy... Muse, and of course, THE EdstanleY

(7.) Did EdstanleY notice any fan draw as a result of The Hills? Justin's presence/storylines were honestly one of the only reasons I watched it... Besides all of the eye-candy! ha The Hills was actually where I first heard tell of EdstanleY. I vaguely remember you guys performing at a club on one of the episodes.

We saw a huge response from our appearance on The Hills... our hits on our website spiked and we've gained a following of EdstanleY Souldiers from across the globe... We are blessed to have had the opportunity to share our music through MTV and The Hills.

(8.) What's the go-to EdstanleY writing/recording set-up and eventual process(es) like?

We have just written 10 new songs and basically what we do is all get together in a room... Warm up, jam around until we come across something that just kicks ass - a riff, a chord progression, a lyrical idea... Something that just sounds catchy, aggressive and fun.


(9.) Favourite beers? And what are some of the best bars and/or clubs you've hit up in your travels across the country/world?

Hmmm... Miller Genuine Draft, baby... MGD in a bottle and definitely a good Hefeweizen.
Some of our favorite spots have been: The House of Blues in Orange County... The Hard Rock Hotel in Las Vegas, we're super stoked to play The Gothic Theatre in Denver, Colorado at the end of the month... We can't wait to get to Europe and start [rockin'] it overseas!


(10.) I've noticed about an EP's-worth of tracks online... What's the current state of your album? And will it be independently or label released?

We are 12 songs deep into our new album... We're working out the kinks, getting them super tight... We're looking to probably release the album independently... we've got a solid producer in line to possibly work with... A cat that has worked with Rise Against, Shinedown and Puddle of Mudd... We're super stoked!

Right now, we're playing local gigs to gear up for our tour to Colorado at the end of August... We'll also be playing a big show in September at the Key Club in Hollywood, and we can't wait to get on tour across the United States!!

- Thanks again for the opportunity, guys! It's been a true pleasure! Best of luck in your future endeavors!

-- Thank YOU brother Matt!! We truly appreciate your EdstanleY Love!!


All I can say is... great music and that Scott, Justin, and Dave are genuinely an awesome, kind bunch! Working together has been a highly enjoyable experience and I look forward to future collaborative endeavors. Head on over to EdstanleY Music; Where eager fans can be easily linked to the band's various forms of Social Medium. Über-fans are strongly urged to join the newly-formed EdstanleY Souldiers (Street Team).

Posted by Matt Horowitz at 8:18 PM