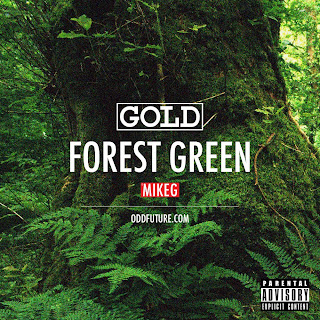 Liberated yesterday by way of @oddfuture Records' Twitter, "Chevron" is a BRAND NEW track from Mike G. Showcased within is Hodgy Beats' premiere attempt @ the delicate Art of Production Technique. Separately well-known for their respective [Screwed & Chopped] remixing and rapping abilities... Mike G. and Hodgy Beats shine here for noticeably FRESH, unique attributes.
It's nice to see a selection of the other 11 Odd Future members getting some shine, as well; Those interested in further listening(s), are stronly advised to also check out the various releases from Frank Ocean, MellowHype, and Earl Sweatshirt. Eager fans should be on the look out for "Award Tour EP," the follow-up to Mike G.'s ALI... which in essence, was in fact the follow-up to Mike Check. This most recent EP will seemingly be the precursor to GOLD, Fire Red, and other aptly-named colored mixtapes/albums.