Scott Mescudi - "No One Believes Me" (Fright Night) 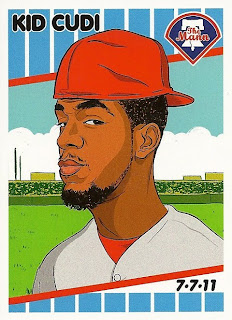 Thus far, the upcoming Fright Night re-make seems as though it will stay pretty true to its 1985 "Cult Classic" status-achieving predecessors, Fright Night 1-2; A rough, general synopsis just might go a little something like this...
While at first, it seems to be a sheer coincidence when a string of high schoolers go missing [dead] and a mysterious new-comer moves into a quaint, rural town - That soon proves not to be the case. Charley Brewster, a local teenager soon becomes weary that his shady, new neighbor Jerry (Colin Farrell) might be the "vampire" in question. But when no one believes his theory, Charley decides to take matters into his own hands.


Therefore, KiD CuDi & Dot da Genius' "No One Believes Me" will serve as a theme song, of sorts. Together, collectively christened WiZard 2 Be Continuum, the pair who previously crafted "Day N Night," are currently chipping away @ a Rock album. Its title and release date are currently unknown, but the collection is said to be near completion. Cudder's other current passion projects include Man on the Moon 3 and "A Man Named Scott," the sequel tape to A KiD Named CuDi (2008).
"No One Believes Me" will be featured on the Fright Night Soundtrack CD. The film itself, is also set to star: Anton Yelchin as "Charley Brewster," McLovin Christopher Mintz-Plasse, David Tennant, and Imogen Poots. Both Fright Night and "No One Believes Me" were jointly directed by Craig Gillespie. Be sure to catch Fright Night when it's released nation-wide in Real 3-D and 2-D this coming August 19th. For the time being, "No One Believes Me" should give eager cinephiles a glimpse into the overall feel of the film. Tune in until the music video's final minutes, as to catch its surprise ending!
Posted by Matt Horowitz at 9:43 AM