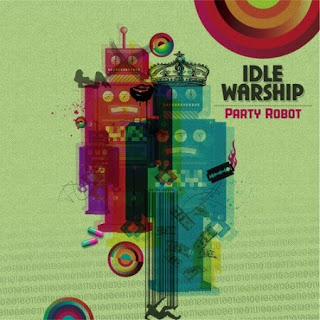 In this current day and age, the once urgent message strewn across "Fall Back" holds absolutely no social relevancy. But let us re-tread a tad bit here... in order to give the track a fair dosage rhyme and reason: 2008 was an ever so crucial time-span for politics in the USA. The catchy, chorus-like refrain at the track's heart, ["We all know you ain't gonna win. Time to throw the towel in. Get your head out your ass and fall back."] was in fact directed at one Secretary Hillary Clinton... during the height of her 2008 Presidential campaign.
The [guilty] parties involved with the creation of "Fall Back" include: Talib Kweli, Res, Graph Nobel, and D.A. Wallach Together, the first 3 musicians are "Idle Warship" - a Brooklyn-based Alternative Hip-Hop/Soul group. Coincidentally formed in 2008, the members had previously worked together in various facets on their solo ventures. After unleashing a string of tracks and remixes to the Internet, Idle Warship released their first full-length mixtape (Party Robot) in Oct. 2009. Having recently released a few new tracks, they seem to be shooting a new music video with R.A. The Rugged Man.


Along with multi-instrumentalist Max Drummey, D.A. Wallach is "Chester French." The two 20-somethings met while attending Harvard, named their group after the famous sculptor, imminently dropped out, and are now perusing their musical dreams. Since their 2003 formation, Chester French have managed to release a successful album (Love the Future) and follow-up fitness-themed mixtape (Jacques Jams, Vol. 1: Endurance). Between albums, D.A. has lent his vocals flourishes to recordings for everyone from Asher Roth to Rick Ross. In a recent e-mail exchange with Mr. Wallach himself, I was pleased to learn that Chester French Album #2 is nearing completion... and that both D.A. and Max "have been working on some really cool musical projects." D.A. is reportedly working on a mixed genre "solo album" with Jamaica's own Supa Dups.

Posted by Matt Horowitz at 9:19 PM