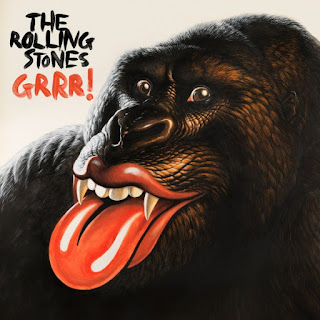 Like most young people my age, I'd say I first got into Classic Rock @ roughly 12-15 because my older cousin Josh gave me a 4-CD Led Zeppelin box set and my parents passed down their Billy Joel, Fleetwood Mac, and Michael Jackson LP's. I guess The Rolling Stones were one of the first bands I really "discovered" on my own - Hearing about them based off their sheer Rock [mega]star-dom and insane hi-jinx. All these years later, The Stones are really the only Classic Rock band still in my regular rotation... Some Girls and Exile On Main Street are 2 of my favourite albums (plus all the hits, of course)! I'm pretty sure that Mick Jagger, Keith Richards, Charlie Watts & Ronnie Wood are damn proud that they've never really pulled an "Aerosmith" [sold out] over the course of their 50-year career; Honestly, they have nothing to prove, they don't give a fuck, and that's TOTALLY fine. The Stones booked a few tour dates in honor of their 50th year together, which quickly sold out, and there are rumors of a MASSIVE world tour in-the-works for 2013. Just to be clear: We're talking about 4 men well into their 70's who could arguably Rock harder, "last longer," get 10x more women, and drink WAY more than your average awkward, pimply teenager!


"Doom & Gloom" is one of 2 new tracks appended onto The Rolling Stones' newly-packaged 50-track greatest hits collection, GRRR! It's their first new track in 7 years and supposedly stems from the early sessions for the band's long-rumored 23rd studio album, the proper follow-up to A Bigger Bang (2005). "Doom & Gloom"'s companion music video was directed by Jonas Åkerlund and stars Prometheus/Girl with The Dragon Tattoo (Sweden) leading lady, Noomi Rapace. Åkerlund somehow manages to paint a vivid, slightly pre-apocolyptic picture of the world The Rolling Stones describe throughout the track, juxtaposed against Mick Jagger's DIRTY intro/lead guitar riff. Noomi Rapace brutally kills some zombies, flashes a boob or 2, frivolously burns money, does her best Flashdance impression, stuffs her face til she pukes, and subs in for assorted Stones members during performance footage. The Rolling Stones' 50th anniversary collections, GRRR! and Crossfire Hurricane, which is now view-able on HBO and should be coming soon to a theatre near you!
Posted by Matt Horowitz at 1:44 PM