She Hates Men, Women... EVERYTHING: Amanda Palmer - "Do It with a Rockstar" (Wayne Coyne) 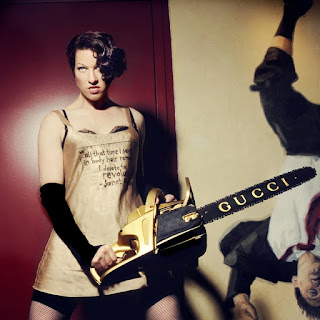 "Do It with a Rockstar" seems to chronicle the semi-average, often mundane existence of a slightly washed up Rock "N" Roll legend. My best guess is that Amanda Palmer is a liberal-thinking feminist/bi-sexual "Punk Cabaret" cult hero, a former member of The Dresden Dolls. Palmer managed to fund and record her latest album, Theatre Is Evil, with nearly $1.2 million notoriously raised on Kickstarter. It was only following a pretty cut-throat, spirited, and publicized exchange with veteran producer, Steve Albini (Nirvana) that Amanda Palmer finally agreed to pay her crowd-sourced horn and string players with money over "beer and hugs/high-5's." "Do It with a Rockstar" isn't Palmer's first time behind Wayne Coyne's directorial lens; The Flaming Lips roped in Amanda Palmer for a re-recorded version of "The First Time I Ever Saw Your Face" after Erykah & Nayrok Badu pulled out of the slightly risque Heady Fwends video.


"Do It with a Rockstar"'s music video is augmented by a 2-minute "Thriller"-like pre-story, which shows a group of drag queens and snooty Hipsters getting ready for Palmer's club gig. Friends-collaborators Michael McQuilken & George Salisbury helped direct the opening scenes and one of the Hipster kids [redhead] is played by fiery pornstar, Stoya. Keeping in line with the song's underlying Plain Jane meets Rockstar storyline, her character manages to sneak backstage after locking eyes with Amanda Palmer and they eventually hook-up, "bum uglies," etc. Wayne Coyne even made sure to include a hearty dose-age of sex, drugs, Rock "N" Roll, glitter, debauchery... armpit hair, boobs, girl-on-girl action, sausages, and unexpected surprises making "Do It with a Rockstar" pretty damn NSFW! Amanda Palmer uploaded a lengthy blog post the other day about the video's creation and Theatre Is Evil is now available online in a number of CD, vinyl, and mp3-based packages.

Posted by Matt Horowitz at 9:18 PM