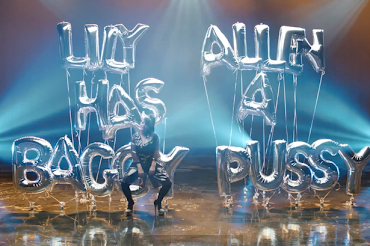 Even though she released a new John Lewis-backed Keane cover just the other day, British Indie-Pop star Lily Allen has finally returned with "Hard Out Here," which could be a sonic indicator of her forthcoming third studio album. It's titular refrain goes something like "Forget your balls, and grow a pair of tits / It's hard, it's hard, it's hard out here for a bitch" and Allen addresses jarring topics such as body image, media-propelled sexism, super-sexed up video vixens, non-equality, injustice, etc. "Hard Out Here"'s companion Christopher Sweeney-directed video essentially conveys everything that Lily Allen whole-heartedly despises about Hollywood/London elite: plastic surgery, TWERKIN', Robin Thicke, wasteful champagne-pouring, ridiculous weightless ideals, wildly expensive cars. It's done in a very tongue-in-cheek way though, whereas if you didn't know any better, you might think that Allen was a terribly misguided Paris Hilton-esque socialite ha.


"Hard Out Here" marks Lily Allen's long-rumored comeback and it's her first single since temporarily leaving music in 2009; somehow, it's already garnered nearly 1.3 million+ views since debuting online Tuesday afternoon! But with great success never comes without some sort of controversy... countless Twitter-assisted detractors "viewed Allen's use of black back-up dancers as racial exploitations," as writer Chris DeVille (Stereogum) simply put it. @lilyallen quickly fired back with a lengthy TwitLonger-appended post titled Privilege, Superiority and Misconceptions: "If anyone thinks for a second that I requested specific ethnicities for the ["Hard Out Here"] video, they're wrong... if I could dance like the ladies can, it would have been my arse [ass] on your screens!" Tom Breihan recently lamented in a post, "Allen is planning to release her third album next year, which is good, since the world needs songs about babies with cussing in them," while "Hard Out Here" hits iTunes this upcoming Sunday, November 17th.

Posted by Matt Horowitz at 9:39 PM