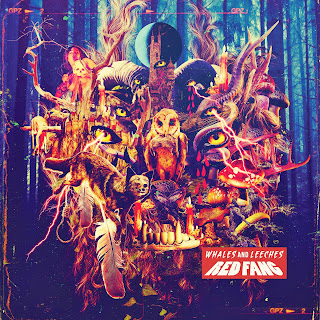 While it would seem like Portland-based Sludge-Metal band Red Fang just accepted a big-ass super-check from Pabst Blue Ribbon to fund their awesome new video "Blood Like Cream," it's still arguably the best music video I've seen in about 2 weeks. Former SNL funnyman, and smashin' Punk-Rock drummer in his own right, Fred Armisen co-stars alongside the band's four members and an angry mob-full of zombies; But not just any zombies... flesh-eating AND beer-guzzling zombies with a thirst for destruction! The Rolling Stone-premiered havoc centers around a local watering hole, where Red Fang and a quickly dismembered Armisen are forced to go toe-to-toe with a slew of blood beer-thirsty zombies. "["Blood Like Cream"] is about the stress of balancing a touring lifestyle with having a family back at home, but who wants to see a video about that?" frontman Aaron Beam recently lamented to Rolling Stone. "Boring! Instead, we have a video featuring lots of blood, beer, and exercise - some of us did more running in this video [than] we've done the whole year to date!" It's kinda ironic, and awesome at the same time, that the only non-band member in "Blood Like Cream," Fred Armisen, has essentially made a living these last few years making fun of Portland, Red Fang's home city; their latest album, Whales and Leeches was unleashed back in October. Rolling Stone dually notes that Red Fang are gearing up to make their late-night TV debut on Letterman this upcoming January 10th.