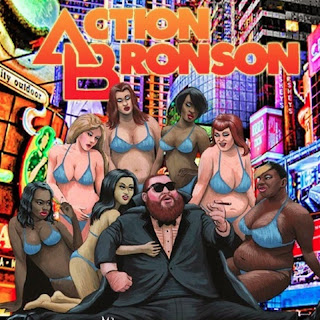 "IF [YOU] LISTEN TO THIS, [YOU] WILL HEAR ANOTHER SNIPPET OFF MR. WONDERFUL. SHHH, DON'T TELL [ANYONE] @Alchemist THIS EXPLAINS IT," @ActionBronson quietly Tweeted late Thursday night, alluding to his recent "Which Ways The Beach Mix;" commissioned by Dr. Romanelli (DRx) and footwear company, British Knights and jointly produced by The Alchemist & Samiyam. The newly-minted rapper-producer beatsmith team painstakingly culled right around 8-minutes worth of audio snippets and vocal effects harvested from a series of 1980-90's British Knights TV commercials. It's without a doubt, an interesting sound collage, which fittingly provides viewers and sneaker-heads with a self-proclaimed "contemporary musical travelogue through BK History." Action Bronson bulldozes in at about 6:15 as the beat suddenly morphs into something, shall we say, a little more rap-able; "I know you seen me on the TV lookin' like a hunk of beef / When I smile, your baby momma sh*tted dungarees / Somebody get the he kid a deal... he sound like me." Its kinda hard to go ahead and make unprecedented assumptions as to what Bronson's forthcoming VICE Records debut will sound like based off an all-too-brief 35-second snippet, but judging by "Which Ways The Beach?" and "Easy Rider," Mr. Wonderful is poised to be one of the most ferocious genre-blending Hip-Hop albums since Kanye's recent Aggro-Rap magnum opus, Yeezus (2013). "This new album I'm about to present to you is all me, Success or Failure, Critical Acclaim or Disappointment. I'll accept it either way... But trust me, [you're] gonna sh*t [your] pants from enjoyment," Bronson recently lamented on Twitter in 140 characters or less.