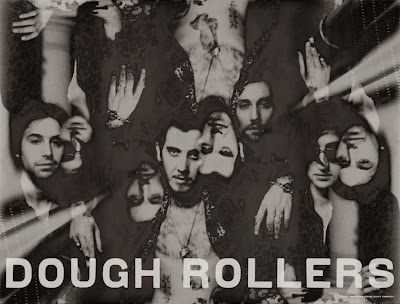 Just the other night, during one of my post-Christmas cyber "record-diggin'" sprees, I picked up copies of The Whooliganz & The Dough Rollers 12-inches, bands whose sounds couldn't be further apart; aside from the fact that both groups feature the talented off-spring of Hollywood elite (Scott/James Caan and Harrison/Malcolm Ford). While they previously self-released a seemingly long out-of-print 2010 10-track album, The Dough Rollers have recently co-aligned with Jack White's Nashville-based imprint, Third Man Records. "The Dough Rollers formed in 2008 when Malcolm Ford and Jack Byrne first decided to put their passion for American roots music to work by trying their hand at earnest, neo-revivalism," reads a recent Third Man press release. "But [with] the addition of Graham Norwood on bass and Kyle Olson on drums, their sound evolved, loosening, swarkening, and darkening... [occupying] the sometimes salty, sometimes sweet spot smack dab in between Rock and Soul," it exuberantly continued.


The Dough Rollers recently unleashed the proper follow-up to their Third Man Records debut, their "Little Lily" Blue Series 7-inch; Ford & co. recruited Queens of The Stone Age frontman Josh Homme produced their November unveiled Gone Baby Gone 5-track EP, which sees "their swampy new swagger fully realized." Rolling Stone previously debuted EP opener and title track, "Gone Baby Gone" nearly a year ago, which the band described at that point in time as, "[It's] like a distant relative to the song we were rehearsing before we went into the studio. It really transformed into something with a totally different character after we sat with it for a while and kept stripping it down and re-layering it. It became almost a whole new song." The Dough Rollers' second Third Man Records release, Gone Baby Gone EP is currently available at the Third Man Store for the reasonable asking price of $10.00, with their proper full-length tentatively soon forthcoming in 2015.

Posted by Matt Horowitz at 9:12 AM