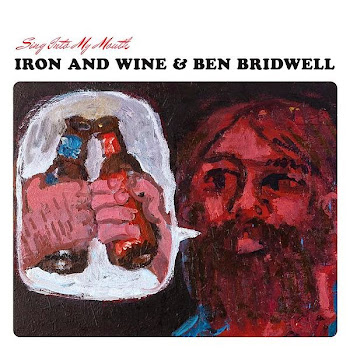 While I've never really been a humongous (read: "huge") Band of Horses fan, I can still however, respect their niche singer-songwriter aesthetic, and I can still remember the first time I heard their flawless modern day Folk-Indie Rock "power-ballad," "The Funeral:" on an episode of MTV's ill-fated pseudo-reality series, My Life As Liz, which Kid Cudi would later go on to expertly sample and rhyme atop on his A Kid Named Cudi mixtape. Around the same time, I can also recall first hearing soft-spoken bearded singer-songwriter, Iron & Wine aka Sam Beam's critically-acclaimed mariachi-tinged In The Reins EP (2005) recoded with Tex-Mex Indie Folk band, Calexico; Iron & Wine would gain wide-spread notoriety with his stripped down cover of The Postal Service's "Such Great Heights" that would go on to appear on both the Garden State soundtrack and within a kaleidoscopic M&M's commercial. "I did a record of covers with Ben Bridwell from Band of Horses. He and I grew up together, so we've been trying to find the time to do something together," Beam nonchalantly revealed to Billboard in a February-published interview supporting his Archives Series, Vol. 1 odds-and-ends compilation.


"This is truly a 'full circle' moment for me... I've always wanted to sing together [with Sam] and I finally have that dream realized. I couldn't be more excited to continue this project at the upcoming shows to take it even further, while playing some of out original songs together," Band of Horses frontman Ben Bridwell excitedly added as per a Band of Horses-sanctioned press release. Sing Into My Mouth is reportedly composed of 12 familiar and lesser known covers selections "reminiscent of more than 15 years ago when [Ben & Sam] used to mail each other cassettes and CD's of music [they] were into." Iron & Wine & Ben Bridwell have managed to thoughtfully re-imagine their own unique covers of songs originally performed by Talking Heads, Bonnie Raitt, Sade, Marshall Tucker Band, El Perro del Mar, and seven additional note-worthy musicians. Beam & Bridwell unexpectedly appeared on Letterman late last week to perform "(There's) No Way Out of Here," which was "originally recorded by 70's act Unicorn, but better known as the lead single from David Gilmour of Pink Floyd's 1978 solo debut;" to coincide with their network TV debut, Iron & Wine & Ben Bridwell unleashed 2 full-length streams of "No Way Out of Here" and sultry R&B songstress Sade's "Bulletproof Soul" ahead of Sing Into My Mouth's soon forthcoming Friday, July 17th world-wide release on Beam & Bridwell's home-grown label imprints, Black Cricket/Brown Records.
Posted by Matt Horowitz at 4:11 PM