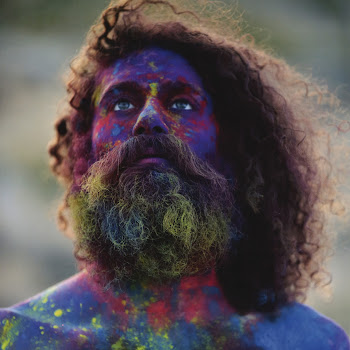 
"My friends and family begged me not to go through with this performance due to the fact that it was only four months after my near-death scooter accident," The Gaslamp Killer revealed to Rolling Stone back in April. "I insisted that I could handle it and after an insane amount of help from the people closest to me – and with only three rehearsals – we got up onstage in front of a sold out crowd of 2,000 people and performed my original compositions live with a 14-piece crew of some of my favorite Angeleno musicians for the first time," Bensussen continued. Urban Obsessor artist Lucien Shapiro is credited with designing the ornate bedazzled masks and "Sculpture + Art Direction of Desert Ritual," while Minka Sicklinger is credited with "Wardrobe Design + Creative Direction of Ritual," who along with Allison Bagg and William Bensussen himself, round out the mysterious "Desert People" from GLK EXP's Phil Nisco & Sawa-directed Coachella desert footage. Although "Ritual" just arrived this past week on the heels of The Gaslamp Killer Experience's final show of 2015, @GASLAMPKILLER promises: "Big news coming in 2016 from my [Gaslamp Killer Experience] crew & some solo sh*t on the way, too!" In the meantime, THE GASLAMP KILLER EXPERIENCE: Live in Los Angeles is currently available in a variety of formats in conjunction with Low End Theory Records through William Bensussen's own personal Bandcamp artist page.
Posted by Matt Horowitz at 12:02 PM