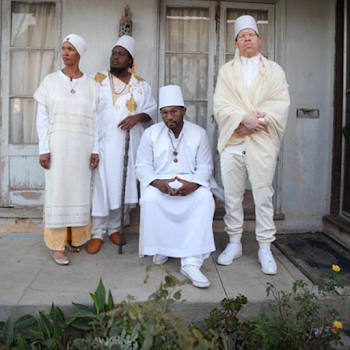 "White means purity, purity means GOD and GOD means the ruler of the land," @ShafiqHusayn profoundly replied, when asked what the name "WHITE BOIZ" actually meant, along with their stark white-stylized aesthetic; "'white" means different things to different people — from their record label to the Los Angeles Police Department to The Nation of Islam. In the 1700's, "white" did not represent race, but a state of freedom versus servitude. Today, however, white can be powder in the trap or a party in The Hamptons, which are seemingly worlds apart. Or are they," Husayn and primary WHITE BOIZ emcee Krondon continued in a Stones Throw-penned press release. Peanut Butter Wolf's latest rapper-producer pairing formed organically out of mutual admiration when the Strong Arm Steady emcee would randomly show up to performances from Shafiq Husayn's then G.O.O.D. Music-affiliated Alt. Hip-Hop collective, Sa-Ra (Creative Partners). "The seed for [Neighborhood Wonderful] was Krondon's birthday in 2011, when the two chopped it up at Shafiq's home and began a year and a half of conversing before any music was recorded... which allowed the musical connection to fall into place with early recordings and appearances on separate solo projects in 2013."

Posted by Matt Horowitz at 7:15 AM