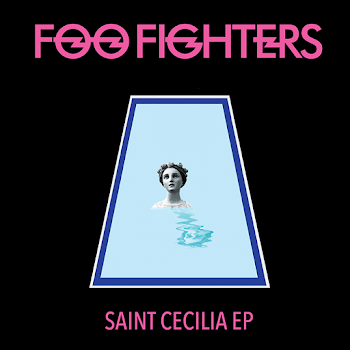 "The Saint Cecilia Hotel, named after the patroness saint of music, is known as "a lush retreat from the world." And, believe me, that it is! 14 rooms and a small bar, it's tucked away in the trees within a bustling, Austin neighborhood. As our van pulled up in the wee hours of September 30th, 2015, I was struck with a rather impulsive idea: to record some songs on our days off to give to the world as a "thank you" for the last 2 years," Foo Fighters frontman Dave Grohl wrote in a heart-felt hand-penned letter on the heels of their 5-song Saint Cecilia EP. "Though there's a world-class recording studio just on the other side of the fence (Arlyn Studios), the hotel manager, Jenny offered that we record in the hotel... by 6pm the nest day, the office was transformed into a control room and the bar was littered with microphones and cables. Amps were in the kitchen. Drums in front of the fire place. Instant studio, courtesy of the legendary Kevin Szymanski," Grohl enthusiastically continued. It would appear as though a few musically-inclined Foo Fighters friends and associates like Austin native Ben Kweller, Gary Clark Jr. and New Orleans' own legendary Preservation Hall Jazz Band made their way through the make-shift hotel studio during SxSW's two-weekend stay, although the definitive tracks to which they contributed are currently unspecified at press time.


Not unlike Dave Grohl briefly alluded to during his "From DG" letter, the Foo Fighters have had quite the marathon two-year album promotional run. Fresh on the heels of their Best Rock Album GRAMMY win for Wasting Light (2011), Foo Fighters unleashed Sonic Highways on the eve of the band's 20th anniversary; recorded at legendary studios in eight different All-American cities with assistance from renown local musicians, a process which was filmed and released as a companion eight-part HBO series fittingly titled Foo Fighters: Sonic Highways. Saint Cecilia EP comes at the close of Foo Fighters' lengthy North American/Broken Leg Tour, a clever allusion to Grohl's now-infamous leg-breaking 12-foot fall from a Gothenburg, Sweden stage this past summer. The bulk of the material recorded for Saint Cecilia EP was culled from previously-unreleased verses intended for inclusion and ultimately, scrapped from older Foo Fighters releases; "'The Neverending Sigh" is 20 years old [and] was once called "7 Corners," for all you die-hards out there," Dave Grohl added. While they've seemingly announced a well-deserved indefinite hiatus, Foo Fighters' Saint Cecilia EP is currently available for FREE download at their website, simply asking fans to donate to the victims of the recent Paris attacks. And for all you audiophiles out there like myself, Foo Fighters have additionally offered up a number of exclusive Saint Cecilia EP vinyl pre-order packages, which are expected to ship by or before February 2016.
Posted by Matt Horowitz at 7:42 PM