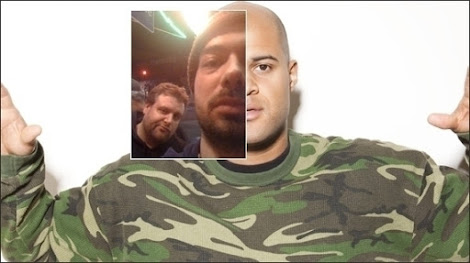 Earlier this fine post-Thanksgiving Weekend morning, whilst I was at Boscov's getting my new suit pants tailored, I had a sudden burst of creativity in the form of a clever one-liner to start a tentative review of Animal Collective's cringe-worthy mess of a new single, "FloriDada:" "There's an age-old music industry joke that goes something along the lines of, "if Radiohead frontman Thom Yorke recorded the sounds of himself sh*tting or farting into a mic backed by the band's music, people would likely still buy it.'" But rather than give those talent-less Art-Rock Three Stooges any more unnecessary spotlight, I've instead decided to review veteran underground emcees Homeboy Sandman & Aesop Rock's far more noteworthy surprise-released Cyber Monday FREE EP, Lice. "You're probably scratching your head right now wondering why this EP is called Lice... The truth is, [Aesop Rock] and I always have all these ideas crawling around our brains and we wanted to share them with you," Homeboy Sandman half-jokingly lamented to Westword Monday morning, concerning their self-described "infectious" 5-song EP. "You may find that after listening to the project, it's nearly impossible to get it out of your head. It's only a matter of time before you share it with others," Sandman enthusiastically continued.


While the jointly released Stones Throw & Rhymesayers Ent. EP was in fact unleashed for FREE on a number of platforms, the seasoned emcees added, "if you are feeling charitable, here are a couple organizations we recommend, where you [donations] can make a difference," before linking directly to the home pages of City Harvest and Prep for Prep. Lice EP features an eclectic collection of head-scratching production work from the likes of DJ Spinna, Optiks, Blockhead, Alex "Apex" Gale, and Charles Hamilton (in that order), as well as original "Lice"-minded artwork designed by Jeremy Fish. It's not entirely unlike a modern day, poetically waxed 2-man "Pass The Mic"-esque delivery throughout Lice EP; "Cats had better not include me in group texts. Cats had better watch they free hand during group sex... I'm only tryna help you; I'm only tryna make you understand that you shouldn't do some sh*t that's whack. You should do some fly sh*t instead." Stones Throw further adds that "physical copies of Lice will also be available in limited quantity on tour in the upcoming year," although it doesn't however, specify if Homeboy Sandman & Aesop Rock will head out on a co-headlining jaunt in a similar vein to their previous Sandman, Aesop Rock & Rob Sonic 2015 US Tour.
Posted by Matt Horowitz at 9:14 PM