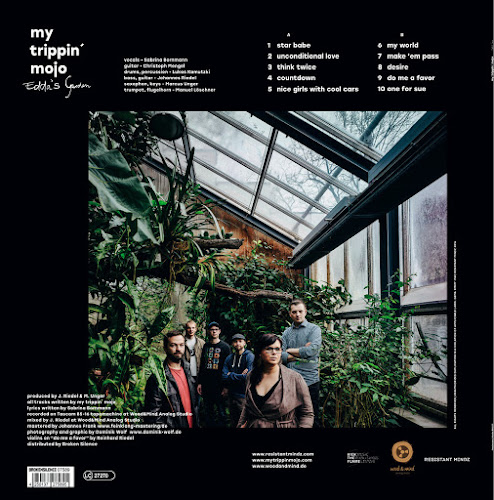 "my trippin' mojo is a raw tape recorded Funk "N" Soul band from Leipzig, Germany. Impressed by the sound and style of the 60's music, they are presenting a current refreshment with their debut called Edda's Garden. Every moment [breathes] the smell of the late sixties and [early] 70's, where the essential of this genre have been defined in a formula which exists nearly unchanged since then. Heavy drums, Funky basslines, hot brass sections, and an extra portion on the guitars wah-wah pedal. On the top of this rhythmic basement, you got Sabrina Bornmann with her powerful voice—sometimes complaining, sometimes demanding. All in a mix which is characteristic for the time before Soul music got straight and more Disco-like. This orientation consistently impacts on all fields of the musical production of the album. And so, Edda's Garden has been recorded complete analog with old mics and a dusty tape machine. 10 tracks full of love, emotions, Soul, and heavy kicks. Available physically and digital in all shops at 4th of November," reads Resistant Mindz's Edda's Garden Englisch PRESS SHEET. Thanks again to my colleague and friend, DJ Prestige at Flea Market Funk, I heard about German-based Soul-Deep Funk ensemble my trippin' mojo and their powerful Live at ZweiTakte EinKlang-recorded "my world;" over the course of the past couple months, I've been in contact with my trippin' mojo's bassist, guitar player, and Resistant Mindz founder Johannes Riedel, who was kind enough to partake within the rather comprehensive 10-question interview you now see transcribed below. If you don't already have a CD or LP of my trippin' mojo's "Soulful as Hell" Edda's Garden, please head on over to Resistant Mindz, pick up a copy on your preferred format, and feel free to delve into Riedel's endless Deep Soul ancedotes waxed throughout our recent interview!

I. Your press release details that Edda's Garden contains "10 tracks full of love, emotions, Soul, and heavy kicks... recorded [completely] analog with old mics and a dusty tape machine;" would you care to further describe the techniques, instruments, etc. used during its recording sessions?

We luckily, have the best playground to play around in my studio and so, we used old mics like Sennheiser MD-421, MD-21, RCA 77-D, some crappy Beyerdynamic Mic and old amps like Fender Twin, Roland Jazz Chorus, and Fender Studio Bass; caught on a Tascam 85-16 Tape Machine and mixed on a Mackie 32-8 Bus Console with its nice EQ's, using a dusty spring reverb from an old Farfisa Amp and a DBX Tube Compressor for some cosmetics and that's it. We usually play 2-3 takes [for] each song and later, decide which one to take to make the over-dubs like the voice, some percussion, or extra horns.


II. From my understanding, Edda's Garden is my trippin' mojo's first album, correct? How long have you been a band and how did you come to meet and recruit its members?

That's right! Edda's Garden is our first piece of music as my trippin' mojo. Most of the members have been together in a freestyle combo called Mengoolious Funk and at the time, I have built up my studio, we decided to write own songs and search for a singer. Luckily, we met Sabrina and she perfectly fit into the band; that's two years ago now.


III. What might you likely cite as some of your greatest influences on my trippin' mojo's sound harnessed within Edda's Garden? I personally, sense notes of Aloe Blacc, Mayer Hawthorne, and Smokey Robinson & The Miracles.

Ha thanks for your [personal] equation! I would say there have been a lot of influences during the time of Hip-Hop, breaks, sampling, and record-collecting, but Daptone [Records] was one of the greatest [of] all. Especially, Gabriel Roth's article about how to record a "raw 45" Soul & Funk piece made it completely into my mind; his work is one of the biggest influences on our sound!

IV. my trippin' mojo has released two music videos ahead of Edda's Garden's release, "make 'em pass" and "unconditional love;" would you care to briefly describe the concepts and filming processes behind these clips?

We have chosen those two songs as they were both the best for us to describe our sound. "make 'em pass" is more into a story of a life situation and our man on the cam René [Eckert] has found this nice, dirty location with its huge space to express the best of the song. We decided to have the lyrics in the front and get some catchy impressions by the flugelhorn parts in the video. "unconditional love" was more a day trip of catching good vibes on the cam to express our love to the music, [people], and nature; a documentation of getting out of the studio, into the world, and sharing our love with her. It is not that big [of a] story behind it.


V. Here's something I've always wondered: how do you decide on which songs to include "hot brass section"-accompaniment? If it were me, I think I would add a horn section to every minute of every song haha.

That's true; I feel exactly the same! It depends on the song, the lyrics, the melody, and the arrangement of the song. Most of all, we keep it easy and simple, so we don't squish the song too much, but this could be different within the next songs. We are still developing our sound.

VI. Now, I love the greenery-framed image on the reverse of Edda's Garden's CD & 12-inch LP, but I must admit, I'm very perplexed by the album's front cover image... what exactly is it?

Hehe, it's an owl looking back from the cover front. It's a nice shot by Dominik Wolf, who created the artwork and we decided to take it as a kind of looking back feeling. Owls are also nocturnal, as we are, too and it reflects a bit the feeling we had in Edda's Garden at night.


VII. Since Edda's Garden has now been properly released, what do you guys and gal have planned next... any plans for a tour, any more music videos, 7-inch singles, or anything else of that nature?

There are some! Right now, we are damn happy to play a few gigs after a long studio term. There is a little tour around Germany, [at] the moment and we will have a next run in February 2017. That's around 15 gigs we are looking forward to [playing]. Next step, [might] be getting back in the studio, recording some new songs, and maybe pressing them on a "raw 45" record. That would be wicked!


VIII. We, here at The Witzard, are a primarily Hip-Hop-centric publication with one foot firmly planed in Indie/Punk Rock and the other in Soul-Funk; with that said, what might you cite as a few of your favorite Hip-Hop releases of the past 12-18 months?

That might be a bit difficult, as I'm not that up to date, but in the last months, I really [dug] Golden Rules (Paul White & Eric Biddines)' Golden Ticket, Jneiro Jarel's Lost Pieces, and Jeremiah Jae's The Decline of Black Anakin EP.


IX. In addition to my trippin' mojo, who else is signed to your Resistant Mindz label, Johannes?

Actually, we are not signing them. Each artist on our rooster stays free to whatever he wants to do with his music. Right now, there are 16 artists on our label, like Chris Medleigh, Duktus, Konglomerat, The Brothers Nylon, DFKT (Defekto & Mr. Beef), DYZE, and many more.

X. This may, however, persist to be an invalid question; but do you or any of your fellow band mates have any sort of side, projects, solo projects, or outer-band endeavors you would like to promote within this space?

We do have: Christoph [Mengel] is makin' left-field Electronic music with his project Chris Medleigh & X Cluding The Shapes (including a drummer). Lukas [Kamutzi] also plays a lot in Brass ensembles, Jazz ensembles, and others. I'm doin' beats by sampling and playing along under the name of REEDFLAVOR, but also other productions like library music, breaks, and stuff. Plus, I'm promoting and booking, via the label Resistant Mindz and the network Golden Ticket to push artists I like and love.
Posted by Matt Horowitz at 10:42 AM