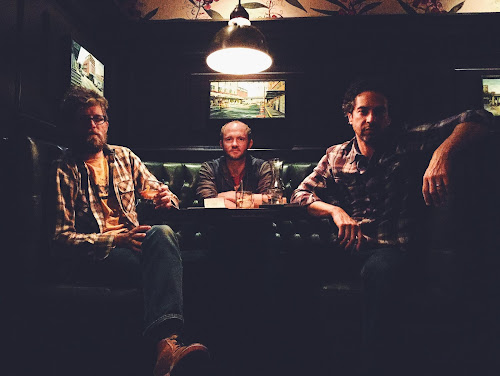 "We're mashing up classic 1960-70's Soul grooves with the 80's synth-aesthetic of guys like Lucio Battisti and the heavy guitar riffs found in Modern Rock by guys like Jack White," says Teddy Presberg. After spending five years steeped in the St. Louis Jazz and Soul scene, collaborating and touring heavily with organ player LeClare Stevenson, the two decided to move back to Portland to launch a new project. When they landed in Portland and fired up their experimental organ trio project DoveDriver, they sought out an unlikely vocalist and songwriter to tighten that sound and launch pigWar: Garett Brennan," reads a fragmented chunk of pigWar's recent Outright Music press release. Presberg's latest and main band, pigWar list Teddy Pendergrass, Led Zeppelin, Lee "Scratch" Perry, The Faces, J Dilla, and Parliament-Funkadelic amongst their greatest sources of influence. DJ Prestige at Flea Market Funk further notes that "there are elements of Modern Rock, as well as spacey synthesizer grooves from the 80's, all wrapped up into a different shape, size, and sound that is pigWar. Like they said, they want to take people to the edge and are inspired by those who do so." I've been corresponding with Teddy Presberg and pigWar's booking agent Adrian Jones since before the holidays and I'm proud to present The Witzard's first full-length published interview of 2017 with the living Soul-Funk legend himself; a comprehensive conversation, which covers everything from listening to Lucio Battisti's 1977 Ital-Disco classic Io Tu Noi Tutti for inspiration to once having bandmate LeClare Stevenson "touring under his name and playing his tunes." Please feel free to sit back, relax, and delve deep into my interview with modern day Soul-Funk revivalist, Teddy Presberg! Happy New Year, my friends!

I. Would you care to briefly run through the various members and players responsible for pigWar's sound, detailing each members' role within the confines of the band?

I'm Teddy Presberg and the main writer in pigWar. I wear cardigans and play guitars, some synths, and bass. Garett Brennan is my [lyricist]/vocal co-writer and the main singer on the album. Although, we've recorded and toured with several different lead singers, Garett had a big part in shaping the sound of our new album. LeClare Stevenson does the vast majority of keys and synth bass. He also wrote the music for "Hard Livin.'"

Also featured on the album: David Coniglio on drums, Josh Thomas on trumpet, and Reid Neuman on the reeds. Plus, a handful of guests and friends here and there.


II. How would you say your music, as well as your personal artistic vision, as evolved since your 2007 Ropeadope Records-released Blueprint of Soul LP?

I'd say a couple of big things have changed with my music in the last couple of years: the first is that I am collaborating a lot more on the compositions upfront, where in the past I would pretty much just write everything. The second thing is that I [used] to write the melodies first and just fill in the rest. Now, I'm tending to start with the basslines to make sure the groove is first and foremost; that hasn't necessarily happened with the pigWar songs, but I think as a result of doing that in other formats, it has made these songs tighter, as a result.


III. How do your assorted projects, such as The Resistance Organ Trio, Soul Rub, FU*K MONSTER, DoveDriver, and your own solo work, play into the genre-defying sound harnessed by pigWar?

These are all unique projects/bands with their own concentrated focus (or lack thereof)! I guess the main thing with having different musical outlets is that I am able to satisfy my brain and write and play different types of music. I've got a band that will play my weird Jazz tunes with The [Resistance] Organ Trio, I've got a band like DoveDriver that does the hard groove stuff, and I've got a band like pigWar that I can write words and tight Soul songs for. And then some, as well!


IV. What were some of your greatest stylistic and artistic influences while writing and recording pigWar's self-titled Make Love, Vol. I-II follow-up that may have leeched its way into the album's overall sound?

A chunk of those songs were influenced by the Leonard Cohen album I'm Your Man. I also listened a lot to Lucio Battisti's Io Tu Noi [Tutti], as well. Trying to take that vintage 1960's-70's Soul vibe, but add synths and darker or party lyrics is what I'm going for. There is a lot of great Soul records from the 60's and 70's and now there are a lot of great bands playing that style tight and true. We're trying to f**k up that style for the better and do something different!


V. What exactly is the band's name, pigWar, a reference to? I see pigs prominently featured across the covers of your recent Make Love, Vol. I-II Bandcamp releases.

The Pig War is a war the happened in our neck of the woods, the San Juan Islands [British Columbia, CAN], in the 1860's that is the only war in the history of the universe in which there was no actual bloodshed. It lasted for about 12 years and soldiers on both sides of the war just hung out and made love and cooked and enjoyed the scene.


VI. I've read within your Outright Music press material that you're a fan of J Dilla; how exactly does Dilla's music, as well as Hip-Hop music in general, play into pigWar's sound?

It doesn't really... I think anything you listen to will come [through] a bit in your music. The Dilla influence is probably more prominent in what we are doing with DoveDriver these days.


VII. I know it's a little late now... but what might you likely cite as some of your absolute personal favorite releases of 2016? Anything that might particularly surprise my readers or your fans?

The Michael Kiwanuka album Love & Hate is a beautiful thing. I think Danger Mouse did a brilliant job with it!


VIII. What's next for pigWar and your outer-band musical endeavors? Do you have any immediate plans to tour, record new material, release any more singles, vinyl pressings, music videos, etc?

Please do an email sign-up at one of our websites: www.teddypresberg.com / www.pigwarmusic.com / www.dovedriver.com and keep up with us! You can also purchase or download some free music from us at one of those sites and leave your email address. Or find us on social media. We are always releasing new music, videos and doing shows. These days I pretty much keep all of my bands along the West Coast, since I've got a young family and it's nice to be at home as much as I can.


IX. What kind of role did DoveDriver have in you meeting organ player LeClare Stevenson and now-frontman Garett Brennan and ultimately, forming pigWar?

LeClare and I are musical life partners. We've been playing music together for eight years now. We did a rough estimate at one time that we've played over 500 shows together. It's actually probably way more than that, but we don't have time to figure stuff like that out. In the good old days, he was in my band, touring under my name, and playing my tunes. In DoveDriver, we have a Lennon-McCartney partnership going on there.

I [used] to play in Garett's band 15 years ago doing his Folky Americana stuff. So, we've known each other for a long time. I encouraged him to make the leap to sing Folk music ['cause] I just knew that his gravelly voice would make a nice addition to the Soul music community!


X. "The self-titled album [pigWar] was co-produced by Teddy Presberg & The Monophonics and recorded in November 2015 at Transistor Sound Studios after a set of rowdy shows at pigWar's favorite San Francisco venue: The Boom Boom Room;" who exactly are The Monophonics and how long did it take you guys to fully record and produce pigWar?

The Monophonics are a Soul band based in San Francisco. They didn't produce the album, but they did record it and mix it at their studio. We cut the album live in two days in November of 2015. Then, I did all the edits and over-dubs for the next few months and then, back to them to mix. Erik Wofford mastered it and boom... one year later it was complete.


XI. You've previously said that "there's an incredible throwback thing happening in Soul music right now..." who might you deem as some of the best/most note-worthy young Soul bands actively functioning in and around (or even outside of) Portland?

Daptone Records really sets the bar in that world with their releases. The Monophonics are also doing a justice to keeping it real. Sonny Knight & The Lakers, Rachel Modest, Durand Jones, and the way deep sounds of Pat Van Dyke are some of my favorite contemporaries doing it.


XII. Now, correct me, if I'm wrong... but are you part owner of your own record label, Outright Music along with pigWar's booking agent, Adrian Jones? If so, what prompted you to start your own imprint and are there any additional Outright-signed acts?

Outright Music [is] fully owned by me, so please don't offer Adrian any money or contracts because he'll sell me out for a hard-shell potato taco! Outright has moved and changed over the years, but right now it's functioning as a boutique licensing agency for me and a handful of my friends and our musical catalogs. You can check out the www.outrightmusic.com website to learn more or see the acts on it. THANKS!

Posted by Matt Horowitz at 8:01 AM