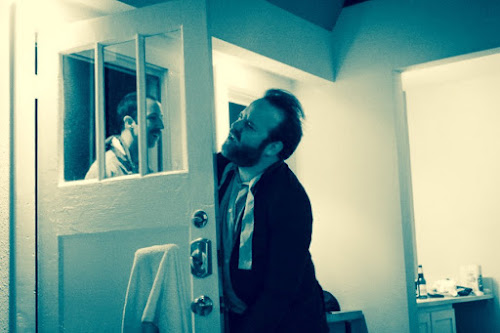 "In the summer of 2008, Chris [Richards] took the bus from Brooklyn to Philadelphia every Thursday afternoon to jam with Sean [McGuinness] and watch The Olympics. They wrote more than 30 songs. Then, they forgot about them until January of 2013. Chris was now living in D.C. and Sean convinced Aaron [Leitko] to cart his Tascam-388 up to Philly for an afternoon of recording. Captured on tape for the ages, these songs were quickly abandoned once more—until the summer of 2014, when Chris finally recorded the words with Aaron back in D.C. Everybody forgot about the songs one more time, before reconvening to mix them in the spring of 2015. And them—after another two years had vanished into oblivion—PRESTO! Street Stains was released in January 2017 and can finally be forgotten forever," reads the description attached to Street Stains 14-track debut. Long-time friends and frequent collaborators (unbeknownst to the rest of the world) Chris Richards & Sean McGuinness finally unleashed their self-titled Street Stains album, which was recorded in spurts over the past 8-9 years.

Richards currently writes for The Washington Post as a Pop music critic, was once a member of D.C.'s beloved Post-Punk/Hardcore band, Q and Not U, and released a lone 2005 solo album as Ris Paul Ric; Sean McGuinnes, a former pro wrestler, currently drums with Philly Noise-Rock/Hardcore Punk band Pissed Jeans and Justin Geller's new-found Remote Places project and has previously worked with Rat Fist, Birth Control, Ultramantis Black, Navies, Air Conditioning, and A Day In Black & White. Pissed Jeans are currently gearing up to unleash their fifth Lydia Lunch & Arthur Rizk-produced full-length, WHY LOVE NOW? on long-time label Sub Pop Records this upcoming February 24th; with that said, it's really as good a time as any for Street Stains to liberate their self-titled debut! I was lucky enough to shoot an email over to Chris Richards, after leaning about their sheer existence, and within a matter of about a day and a half, here we have this very Sean McGuinness-approved 10-question interview covering Street Stains' long, twisted, slightly stop-and-go journey. Street Stains is currently available from Richards & McGuinness' just-launched Bandcamp page for an incredibly reasonable $3 USD or more fee. It's quite honestly, the perfect record to roll down the windows and rock out to on these unseasonably hot January days!

I. Would you mind going through the slightly scattered, stop-and-start story of Street Stains' stories sessions?

It was definitely more stop than start. I think we took about eight years to do a couple weeks[-worth] of musical work, but long-story-short: we wrote all of the tunes in 2008, sat on them until 2013 when our friend Aaron Leitko urged us to record them, recorded the vocals a year later, mixed it a year after that, and got it mastered a year after that (insert Chinese Democracy joke here).


II. How did you two initially meet and come to decide to record an album together as Street Stains?

We met in the D.C. Punk scene in 1999 and have been tight ever since. As for forming this particular band, I was living in New York in the summer of 2008 and I was feeling low, having just been fired from a job, so Sean, being the lovely human soul that he is, invited me down to Philly, so we could make some music together. The idea was to write as quickly as we could; all spontaneity, nothing precious.


III. How would you say your past work with Q and Not U, Pissed Jeans, Rat Fist, Paint Branch, Ris Paul Ric, Birth Control, and Ultramantis Black ultimately ended up affecting and influencing Street Stains?

For me, the point of doing different bands is to work with different people who you love and honor the collaboration, so they should never really sound like each other.


IV. Your ONE-SHEET press release says that you guys originally wrote some 30 songs during The 2008 Olympics and 14 ended up on Street Stains; what do you intend to do with the remaining 16? How close or far would you say they are from completion?

As much as I hate to waste music, I fear our left-overs might be lost to the ages.


V. How did you settle upon the band name "Street Stains?" What does it mean and what were some of the most note-worthy rejected names?

No rejects! The song title came first and it felt good as a band name. I wrote the words to "Street Stains" when I was living in Brooklyn and walking around all the time. The sidewalks were just filthy and to keep my brain busy, I started wondering if there might be hidden messages or omens in these splotches of mystery gunk—reading tea leaves in the street, as it were. I really disliked my time in New York, so when I saw a puddle of dog wiz in the shape of Florida, it made me wonder if the universe was telling me to relocate to Miami.

We put that line in our email blast just to give people some context for where the lyrics are headed. I've always loved Punk's ability to transmute life's [pet] peeves into something interesting. Stand-up comedians do that, too.


VII. It's up on Bandcamp, but do you have any current plans to re-release Street Stains in various physical formats (CD, LP, and cassette) on either of your past and current labels, such as Sub Pop and Dischord Records?

I think we'll print up some cassettes, so we have something to put in people's hands at shows, which leads to your next question...


VIII. I'm sure both of you are exceedingly busy and preoccupied with Pissed Jeans, Washington Post, your families, etc. but do you have any current plans to tour together behind Street Stains?

We'd like to do a short little East Coast thing this Summer or Fall.


IX. Aside from Pissed Jeans, Q and Not U, Ris Paul Ric, and your own past projects, what were some of your greatest sources of influence and inspiration while recording Street Stains (2008-17)?

I don't think this music was the result of outside influences so much as the trust we have in one another. That sounds corny, but I'm serious. The songs took a long time for us to record and release, but we made them very quickly. And it's not like my guitar riffs are masterpieces or anything, but they all came effortlessly because Sean's drumming is just so alive. So, even if the music sounds crude and quick, I hope people can feel that we were really listening to each other.


X. Let's just say, for argument's sake: you were able to assemble a super-group containing yourself and any additional musicians of your choosing (dead or alive), who would you choose and why?

How about we keep Sean on drums... and then have ["Deep Listening" composer] Pauline Oliveros do an accordion drone, [Talking Heads keyboardist] Bernie Worrell on synths, Sade is the frontwoman, and I end each song by striking the biggest gong you've ever seen?

Posted by Matt Horowitz at 7:53 AM