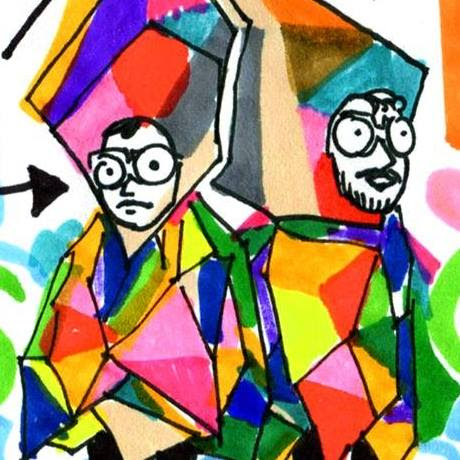 Darko The Super is a close personal friend and frequent collaborator here at The Witzard, whom I'm met through our mutual friend John "Jumbled" Bachman; I've been lucky enough to premier his Halloween-themed project Put Down The Candy & Let The Little Boy Go! wrote about his 10 album-encompassing "2016 Sucked, But Darko Released 10 Albums & That's Pretty Cool" (Mix, Mix, Mix), showcased BLKrKRT's U DONT DESERVE THIS BEAUTIFUL ART-premiered Okinato Black, as well as a number of various projects in-between releases. Darko is hearing up to unleash what may arguably be his Rock sample-based "commercial breakthrough," Apocalyptic Bastard on Already Dead Tapes this upcomingFebruary 24th. We're currently putting the finishing touches on an Apocalyptic Bastard-centric interview to be published right here at The Witzard to coincide with its release. While we patiently await The Fabulous Downey Brothers five TURF-spawned music videos, here's Darko The Super & ialive's "Mellow Yellow 2" from their forthcoming The Return 2 The Hell Hole Store, which they've submitted to NPR for inclusion within their beloved Tiny Desk Concert series. The Fabulous Downey Brothers' latest Alternative Electronic Experimental New Wave Pop Rock ZOLO Cyberpunk Goth Pop Punk Rock Synthpop Synthwave-blending release TURF is currently available for just $7.00 in either digital download or CD formats on Swoon Records. For those interested in Darko The Super's unique brand of Alternative Hip-Hop, there are roughly 49 albums, mixtapes, EP's, and Doc Heller instrumental releases available for your purchasing and streaming pleasures from his personal Bandcamp page. I recently suggested Darko review The Fabulous Downey Brothers' TURF EP and man... is it one interesting, yet informative read!


"Get ready to smack your pappy; today we have a new EP (that’s an extended play for those who aren’t in the biz) titled TURF from The Fabulous Downey Brothers. I’m writing this article from the standpoint of not knowing anything of the origin of this band or the label releasing it—only the music itself, Which is maybe a bad idea to base a whole "review" off of, but I play by my own rules. The Witzard himself sent this album to me, saying it screams "DARKO," insinuating that I’m a weirdo and would love this warped, yet beautiful music. For once, he was right. This album is incredible, as the promo insisted, it did melt my face to goop. I am a puddle of vanilla pudding right now transmitting these thoughts from a far away dimension. The Fabulous Downey Brothers have a tiny little man hiding in their teeth and want to tell you all about it. Maybe you’re a prude dork and that doesn’t interest you, but I am very intrigued. Here are some bands I think of upon hearing this EP: Devo, Frank Zappa, Oingo Boingo, and Beck—all the best bands! Some stand-out tracks would be: #1, 2, 3, 4, and 5. "Ditch" is simply audio milk and honey and The Downey Bros. are pouring it all over you, baby. "The Bottom" seems fit for one of those brilliant new Indie Horror films; someone get Adam Winguard on the line! "Don’t Do It" feels straight out of an 80's coming-of-age movie or maybe one of a dystopian future; something like Kung Fury, but with a young Molly Ringwald. "Counting Crows," which I assume is better than every Counting Crows song in existence, is a truly bizarre experience. It makes me wanna bash someone's skull in at a bowling alley. Sorry, I just read Catcher In The Rye again. Where’s Ronald [Reagan] when you need him? Obviously, I highly recommend this incredible piece of art. I, for one, am going to learn everything there is to know about these Fabulous Downey Brothers. Til then, give them all your money on January 20th, when TURF is released to this undeserving world."

- Penned By: Darko The Super

Posted by Matt Horowitz at 4:11 PM