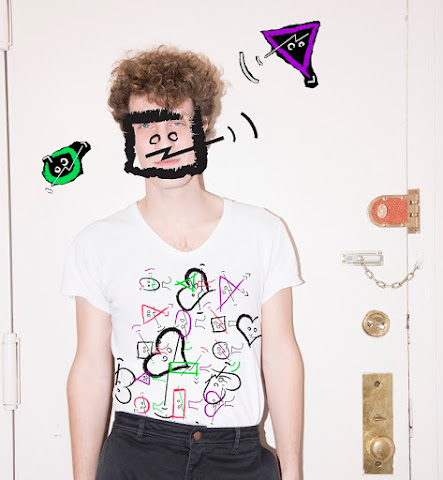 "I recorded myself actually, ["Tape a Twenty" is] one of the few songs that I recorded everything and mixed everything myself on ["STILL LIFE"]. And it was done in Amsterdam. It's kind of a love song about making the imperfect work; like there's nothing perfect, but everything is imperfect/perfect. The video, I made at at the beginning of last year at my school HKU (Utrecht University of The Arts), where I'm doing a Masters in Music Design. It was the first two weeks of school—we just had this time to work on a project and I kind of decided I wanted to run around the school with a video camera and make a music video. It was funny 'cause I was in a music program, where I could do anything I wanted for the first time of my life, and I spent my time working with video. I built these kind of weird temporary sculptures out of junk and strapped a smartphone on the top to create these weird junk people."

"I imagined a guy, like working in an drab office environment with like these co-workers that he constructed himself out of junk; kind of like his weird robot friends. I thought it was a funny concept for a love song, someone singing to the projection of his own mind... kind of like falling in love with your own Frankenstein. Maybe all love is somewhat like that—we fall in love with our own projections of who people are. Anyways, I kind of edited this video last year and sat on it for a long time not knowing if it was "done enough" or whatever and I think in keeping with the concept of the song, it doesn't make sense to try and make this perfect thing, but rather it is imperfect/perfect and it's "done enough,'" Adam Lempel, one half of experimental Baltimore Art-Pop band WEEKENDS, continued. Lempel has taken a bit of a self-imposed sabbatical since WEEKENDS' last full-length release, New Humans (2013) and relocated to Amsterdam, where he's currently perusing a Masters in Music Design at HKU. Adam Lempel's most recent solo release, from which "Tape a Twenty" stems, "STILL LIFE" is currently available for streaming, download, and purchase in a number of physical formats from Soundcloud, Baltimore-based Friends Records' Bandcamp, etc. Lempel tells me he's currently putting the finishing touches on his next solo release, which is tentatively titled Happiereally... as well as WEEKENDS' New Humans follow-up "that's been recorded and mixed already" and seemingly, just awaiting a proper release.