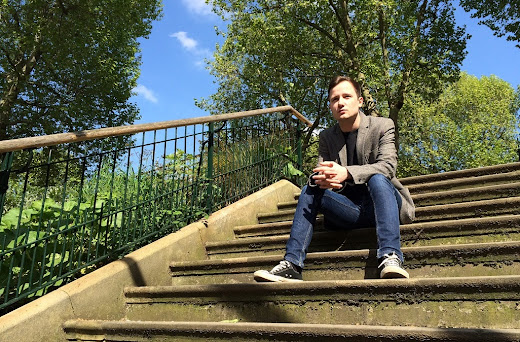 "My name is Charles Edison. I'm a beat-maker/producer/rapper from Essex originally, now based in South London. I started making beats roughly 10 years ago, but got semi-serious with it around five years ago. I use a mix of samples and synths in my beats and draw on quite a wide scope of influences, which I'll delve into a little bit with a couple of albums that really defined my approach to music..."

"I know this will probably be on a lot of people's lists, if you ask them about influential or definitive Hip-Hop albums, but it's a great one for illustrating what can happen, when the right people are brought together. Madlib is well-known for finding great loops and not messing with them too much; just opening them up for someone like DOOM with that free-associative flow to just let loose on. To me, it's just the perfect example of a Hip-Hop record. The samples are eclectic and there's vinyl crackle all over it. It has a very clear and strong aesthetic to it, which is something I constantly strive for in projects. I think, there's something to be learned from the simplicity of MADVILLAINY, as well. Samples, drums, and vocals. No hooks and all tracks under 3 minutes. "Fancy Clown:" I know most people would probably pick "Accordion," but I just love the way Madlib cut the sample for this one."

"Like any beat-maker, I love watching videos of artists working in the studio and I must have seen the documentary on the making-of Plastic Beach a hundred times. There's a scene [at 21:10] where Damon Albarn is discussing the album concept with Yukimi Nagano of Swedish Electro band Little Dragon and he says something which really stuck with me since it echoed exactly how I feel about the way music is made and consumed now and has influenced how I approach projects: "We've gotta start taking ownership of records again. As opposed to just being... fragmented. Just constant fragmentation of everything to be put on a playlist. There's no meditation on one thing. So, maybe, you've gotta make something so varied that it sounds like you're going through that whole mentality, when really, you're just meditating on one thing." Spot-on! What Damon does so well with Gorillaz and with this album, in particular, is a kind of "concept album" without the restrictions of sticking too closely to a narrative.

They leave just enough gaps to be able to go off on little tangents for each track and I think, those gaps are the reason they've done so well. Great art exists in the spaces between. It's the same thing as the scariest Horror movies being the ones that don't show you the monster. Because nothing is scarier to you than what your own imagination conjures and I feel like it's the same with art. It's what you perceive; it's how it resonates with you; it's the meaning you take from it and those moments of clarity can only come from what isn't spoon-fed to you. The album gives you the basic set-up: it's an island where all the plastic and rubbish in the sea has washed up. You fill in the rest using the tracks as vignettes to this premise and that's a very clever way of "making something so varied that it sounds like you're going through that whole mentality, when really, you're just meditating on one thing." "Empire Ants" [-feat. Little Dragon]: The build-up in this one is superb and when the main synth line drops, it's phenomenal! It just washes over you."

"This is quite a recent find for me. I came across su na on Bandcamp, via his 2017 EP, Coral Angel, which I immediately ordered on vinyl. After keeping it on heavy rotation for a while, I looked into his other stuff and found Surface. Coral Angel is a mostly instrumental affair, whereas, Surface blends nicely with some hazy vocals that compliment his style perfectly. He draws on a range of sounds from ambient to UK Garage, Hip-Hop, and House. This one is influential for me because it most accurately conveys the kind of stuff I want to be making next and it blends elements from the aforementioned genres effortlessly. The most inspirational stuff to me is the stuff that's not "obvious." I like to be surprised, I guess, and it's harder than ever to do that these days. "Essex:" Just a lovely piece of music!"

"I used to hate Jazz. And more than that, I used to hate the reason why I hated it... because "it's just noise!" It used to make me feel like a parent, out of touch with what's cool. I don't know when, specifically, my opinion towards Jazz changed, but I remember listening to John Coltrane's version of "My Favorite Things" and because it's such a familiar song, I could appreciate the improvisation a lot more. Once you can learn to let one half of your brain settle in to the groove, while the other half listens to the improvisations on the scale, it stops being "just noise." It becomes exciting because you don't know what's coming next and when or if it's ever going to settle back into that groove again. Based on that listen of "My Favorite Things," I listened through some other John Coltrane bits and this was my favourite album.

The last track, "The Drum Thing," in particular, is amazing. It's over 7 minutes long and is predominantly built around a long, ambling, and incessant drum solo that seems to go on forever. The tension it builds is incredible and rather than climb to any kind of resolution, it settles right back in to the groove it started with. Hip-Hop can be very formulaic in structure: 16-bar verses, 8-bar hooks, 4-bar intros. It's easy to get stale when you're sometimes, making upwards of 5 beats a day, so keeping an album like this in the forefront is a good reminder for me to challenge the structure, sometimes, and try new things. "The Drum Thing:" It's probably not the best one to start with, if you're new to Jazz, but for the reasons stated above, it's worth checking out, at least once."


Late last night, I received a particularly tongue-in-cheek Bandcamp Notification email from Charles Edison, which read: "Wouldn't it be nice if BandCamp had a slightly better mobile player? Well, don't worry, Everything Is Fine (see what I did there?) because my new EP is now available to stream on all good platforms from today. Yes - even the one you only sign up for every time JAY-Z drops something new." Everything Is Fine is Charles Edison's first release since last year's Reception EP and overall seventh marathon Bandcamp release since 2014. The Witzard & Charles Edison previously teamed up for a few pieces of tailor-fit coverage on his two most recent releases: a comprehensive interview coinciding with Reception EP and an All-around Breakdown column to help commemorate the 1-year anniversary of Edison's deeply personal Waking Up EP. Everything Is Fine, much like Charles Edison's past works, is a concise, yet deeply personal, well-orchestrated Soul-laden 5-track EP. Everything Is Fine is currently available to stream or download from Edison's Bandcamp page, as well as a multitude of digital streaming platforms. Next up for Charles Edison will be his long-rumored Beats from The 7th Floor project, which he is currently shopping around to labels for imminent release.