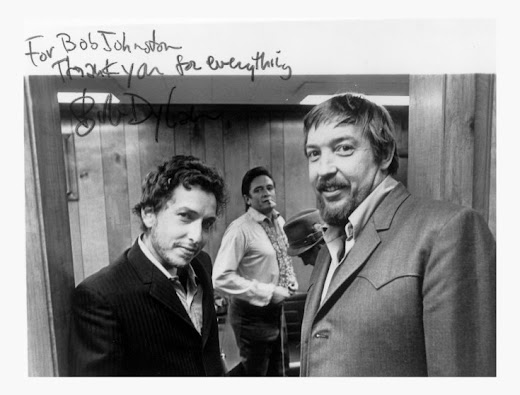 So, as a record collector myself, I can safely say, one of the most sought-after records for most record collectors to "dig" up would be a coveted Bob Dylan & Johnny Cash bootleg. Said fabled bootleg has been released under numerous titles over the years, including The Dylan Cash Session, The Nashville Tapes, Nashville 1969, and Partners on both unofficial LP's and CD's. A few years ago, I was, actually, lucky enough to unearth a copy of 2009's pseudo-yellowed The Nashville Tapes in a crate at a record/antique store up in Mullica Hill, NJ, I believe. Now, it appears as though those infamous 1969 Dylan/Cash sessions will finally be officially released in full on Bob Dylan (Featuring Johnny Cash) - Travelin' Thru, 1967-1969: The Bootleg Series, Vol. 15. As seen within 2005 Joaquin Phoenix-starring biopic, Walk The Line, Johnny Cash & Bob Dylan were both, seemingly, long-time fans and mutual admirers of each other's work; then, suddenly, one fateful day in 1969, Dylan & Cash recorded what has now ended up being a disc and a half-worth of material together with Rockabilly pioneer, Carl Perkins and world-renown producer, Don "Bob" Johnston.


Upon his death in 2015, Bob Johnston had amassed production credits for iconic albums, such as Bob Dylan's Highway 61 Revisited, Blonde On Blonde, John Wesley Harding, Nashville Skyline, and Self Portrait, Johnny Cash's At Folsom Prison, The Holy Land, At San Quentin, Hello, I'm Johnny Cash, The Johnny Cash Show, I Walk The Line, Little Fauss, and Big Halsy, Simon & Garfunkel's Sounds of Silence and Parsley, Sage, Rosemary, and Thyme, and countless other beloved long-players. Although, strangely enough, up until now, the only recording to be widely released from Bob Dylan & Johnny Cash's fabled sessions was "Girl from The North Country" from Nashville Skyline (1969) as well as, eventually, both solo studio and live versions of "Wanted Man." Said Dylan/Cash composition was first released on 1969's JOHNNY CASH AT SAN QUENTIN, at this point, only having been written a week prior with Bob Dylan in Columbia Studio A.


The deluxe 3-disc/LP edition of Travelin' Thru, 1967-1969: The Bootleg Series, Vol. 15 will feature the bulk of these Dylan, Cash, Perkins & Johnston sessions, as well as out-takes from Bob Dylan's albums, John Wesley Harding & Nashville Skyline, Dylan's collection of Cash covers recorded for Self Portrait, the full soundtrack of Bob's appearance on The Johnny Cash Show, and a few home recordings Dylan did in 1970 with Bluegrass legend, Earl Scruggs. Ahead of Travelin' Thru... Columbia Records has released an official music video for Bob Dylan & Johnny Cash's "Wanted Man" (Take 1) which, really, just sounds like two friends and long-time fans of each other's work having a damn good time together in-studio. Johnny's wife, June Carter Cash, can even be heard whispering, "Honey, I don't wanna interrupt your train-of-thought... but be sure that Bob puts the melody to that song, that "Wanted Man," down for you..." Bob Dylan (Featuring Johnny Cash) - Travelin' Thru, 1967-1969: The Bootleg Series, Vol. 15 will finally become widely available in a number of formats through Columbia Records/Legacy Recordings on Friday, November 1, 2019.


"In his liner notes for Travelin' Thru, Colin Escott writes, "Talking to journalist Matt Damsker about the sound of John Wesley Harding, Dylan said, "I didn't know how to record the way other people were recording, and I didn't want to... I just didn't think all that production was necessary." He, also, went for lyrical economy. "What I'm trying to do now is not use too many words," he said. "There's no line you can stick your finger through. There's no blank filler.'"

Dylan returned to Columbia Studio A in February 1969 to work on Nashville Skyline. "Bob asked me to be a guest on the album," Johnny Cash said later, "and I went to the studio and they just turned on the recorder for about two hours." Columbia Studio A hosted two Dylan-Cash sessions: February 17 & 18, 1969 with a band that included Rock "N" Roll pioneer Carl Perkins playing guitar on six tracks (including his own composition, "Matchbox.") One of the more intriguing sonic discoveries on Travelin' Thru is "Don't Think Twice, It’s Alright/Understand Your Man," as two singular singer-songwriters pay mutual compositional and vocal tribute to each other.

The full-day Dylan/Cash duet session included the first known version of "Wanted Man" and the only version of the song ever sung by Dylan. The following week, Cash made it the opening song at his San Quentin concert. The session provides insight into the shared sensibilities of Dylan & Cash through a variety of covers, including two Jimmie Rodgers medleys.

When The Johnny Cash Show was scheduled to debut in June 1969, the host offered Bob Dylan a guest slot on the first show. In the days before and after The Johnny Cash Show taping, Dylan was working on the album that emerged more than a year later as Self Portrait. For the May 3 Self Portrait session, guitarist Fred Carter was brought in to augment Dylan's usual Nashville band. The "Folsom Prison Blues" & "Ring of Fire" [covers] recorded that day are available for the first time on Travelin' Thru.

Although, only one duet with Johnny Cash ("Girl from The North Country") appears on Dylan's original Nashville Skyline album, Cash penned the album's GRAMMY Award-winning liner notes. A month after Nashville Skyline was released, Dylan made his first live TV appearance in five years on The Johnny Cash Show; that performance is, also, included here." 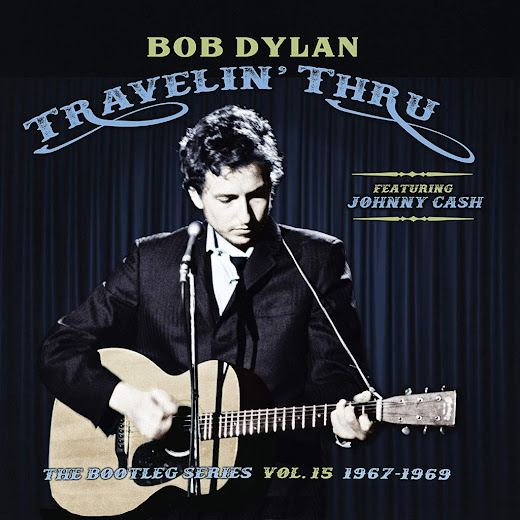 Posted by Matt Horowitz at 6:55 AM